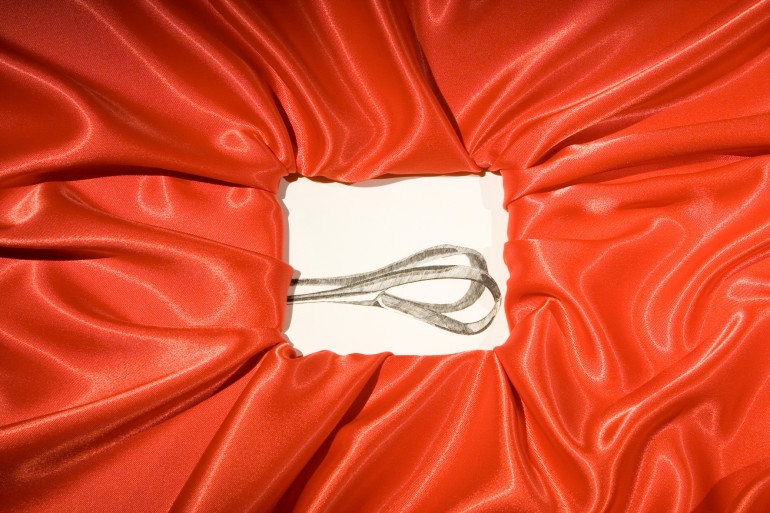 Have you ever wondered about what surgical instruments look like? They don’t strike one as an overly fascinating subject for analysis. What do we know about them? Made from stainless teel, they are keen-edged, sometimes weirdly-shaped objects which normally conjure up unpleasant associations. Quite simply, they exist somewhere beyond the pale of the average person’s interest. These instruments have clearly imprinted themselves on Marta Szulc’s imagination with enormous strength, since she has devoted many arduous months of extraordinaril detailed work to them, creating subtle images of more than a dozen of the instruments used in performing a Caesarean section. The works are intriguing not merely on account of the theme which the artist has undertaken. What also captures the attention is the technique she employs, namely copperplate engraving. The oldest technique of intaglio graphics, it became widely-known as early as the 15th century and was used to create book illustrations and in large-scale cartographic work from the 17th century onward. At the same time, it functioned as an artistic technique. However, it is rarely used in contemporary work, in all likelihood owing to the lengthy and arduous creative process involved; one might well say that Szulc’s use of it is unique. Moreover, despite allusions to the traditional presentations found in the medical text books of former times, her mode of presentation, atypical in terms of graphics, means that she has once again endowed this archaic technique with fresh and innovative traits.

Objects was the installation for which Szulc created her first series of copperplate engravings, devoted to the ordinary odds and ends which, by and large, surround all of us. They include a cotton reel, a blister pack of pills, a walnut, a key, hair grips, a geometry compass, a contact lens case, and a burin, an artist’s tool used for engraving. Szulc wrote of her work that My aim was not to create ideal pictures of little objects. That is impossible, because I’m only human. Mistakes are what differentiate me from machines. They can be insignificant, unnoticeable or camouflaged, like a badly-chiselled line, an imperfect sketch or an abraded print. I accept those mistakes because they bear witness to the work’s humanity, particularly in the age of the computer and the ease with which the reality surrounding us can be reproduced. Like personal treasures, the objects were hidden in wooden boxes hung on the gallery walls. The only way to see them was by means of tiny openings cut into the sides of the boxes, which were lit from within by powerful light bulbs. In elevating the objects to the rank of significant items like this, the artist’s personal microcosm was created. The collection spoke volumes about her herself, her pleasures and passions, the simple, commonplace realities surrounding her. In direct contrast to the Objects installation, touching on life’s ordinary aspects, the Caesarean Instruments installation comes out of the artist’s personal battle with the fears connected to a very particular moment in every woman’s life. In the central section of the Foksal’s darkened gallery, three long, narrow tables are set, as mercilessly lit as in an operating theatre. Blood-red satin covers them, drawing the eye. In the soft folds of the fabric, squares of paper glimmer white. The bulbs’ harsh light illuminates the sharp outlines of the gleaming surgical instruments used in performing a Caesarean section. It underscores their manifold and predatory shapes, which seem to be throwing explicit shadows on to the white paper. Economy of form, the precision of a thin black and white line of copperplate engraving, echo the cool hardness of the steel tools, creating a dramatic contrast to the soft delicacy of the fiery red fabric. Red is the vital strength, life and beauty. It is the colour of majesty, supremacy and divinity. An impression arises that this scarlet brings a peculiar alleviation to the senses, softening the steel’s oppressive sharpness and, at one and the same time, lending the surgical tools the attributes of unique objects. Red is also the sacrifice and the resurrection. A Caesarean section is a serious procedure, employed when a child’s natural entry into the world is an impossibility. In this way, the lives of both child and mother are saved.3 And thus it is an extraordinary procedure, though, as with any operation, it carries a certain risk. Marta Szulc subjects this singular equipment to a very thorough scrutiny, tracing the play of light on its chill surfaces. She recreates every detail meticulously, every decision becomes a crucial matter, every line as keen as a scalpel’s incision. Her months of intense and focussed work became a time for coming to terms with her own fears. The fear of possibly losing her sight during natural childbirth is so powerful and so overwhelming that the artist has overcome her fears of surgical intervention. For her, a person burdened by very poor eyesight, a Caesarean section is no less than a boon and a blessing of civilization. For an artist working in the medium of copperplate engraving and thus with a technique demanding high precision, sight is a sense essential to the act of creation. A sense which, in such a situation, may be saved only by an operation of equal exactitude, performed with a jeweller’s precision. An operation which can save the life of both mother and child, both the artist’s sight and her art. The light in the operating theatre ruthlessly strips the body bare, there is neither intimacy nor the miracle of birth. There are strangers, looking, touching, cutting and stitching. The tools that both inflict the wounds and provide their salvation are the extensions of their hands.

Marta Szulc was born in 1980 in Plock, lives and works in Warsaw. She studied at the Graphic Arts Department at the European Academy of Arts in Warsaw. She worked in the studio of Krzysztof Skórzewski where received her Master’s Degree in the copperplate. She had her debut with the exhibition Objects in 2005 at the XX1 Gallery in Warsaw. Her works have been presented in several group exhibitions in Poland, e.g. Supermarket of Art IV/2 (im)mortal love, international biennial, Warsaw (2007), Słodka sztuka /Sweet Art/, CCA Laznia, Gdańsk (2007), Young Art Biennale “Rybie Oko 4”, Baltic Art Gallery, Ustka (2006), IN OUT Festival, CCA Laznia, Gdańsk (2005) and at the Triennial “Miniprint Finland 2004” Lahti, Finland. She uses various media such as copperplate, installation, collage and video.