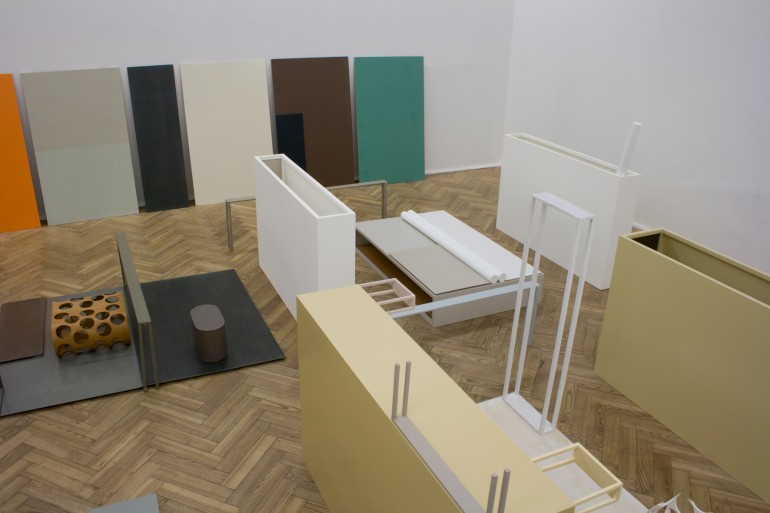 The exhibition is supported by the Embassy of Israel in Warsaw.

The Foksal Gallery cordially invites you to an exhibition of work by the distinguished sculptor and teacher, Professor Nahum Tevet, one of the most highly esteemed contemporary artists currently working in Israel.

Nahum Tevet, alongside such artists as Micha Ulmann, Joshua Neustein and Buki Schwartz, was a co-founder of the post-minimalist scene of the 1970s, a movement of uncommon significance in the history of Israeli art. For years, he has consistently developed his own, individual language, creating sculptural installations which take possession of the space almost in its entirety. On the one hand, these colourful, extended spatial constructions, created in wood, bring to mind architectural mock-ups, urban panoramas or minimalist furniture; in formal terms, they make clear reference to the traditions of the modernist movements from Bauhaus and constructivism to minimalism and post-minimalism. On the other hand, however, an essential role in the reception of Tevet’s work is played by the sociological and historical aspect of both Israeli culture and private histories. In their simplicity and rawness of materials, his objects, reminiscent of modestly furnished kibbutzim, comprise the recorded memory of the utopia of years gone by and, at one and the same time, a reflection of a certain melancholy for the world in which he grew up. The complexity of his work is also founded in the fact that he presents the viewer with the opportunity of moving around between the colourful, geometric forms of his installations, themselves precisely composed within a specific space. Viewing his objects over an extended length of time and from extremely diverse standpoints can provoke the experience of varied perceptions of his art on both the formal and significative levels. The multiplicity of meaning contained within his works places his installations somewhere between sculpture and painting, simultaneously bordering on architecture and the abstract.

From the outset, Nahum Tevet worked on the Diver installation with the thought of the Foksal in mind, giving consideration to the specifics of its space in terms of both proportions and traditions. His earlier works, usually brought to fruition in far larger spaces, were more extended and, at times, quite simply monumental, almost impossible for the eye to take in. At the Foksal, the viewer is able to grasp the entire composition with one glance, for it is they who stand in the dominant position. Whilst working on it, Tevet became conscious of the fact that the emotional dimension of an exhibition at this site had become extraordinarily important to him. Fundamentally, this meant a shared relationship with the modernist tradition, a reference to the powerful ties with constructivism and minimalism so crucial not only to his own work, but also to the work of so many artists and critical selections which together form the history of the gallery. However, this emotional element also triggered his own intensive recollections. Creating an exhibition for the Foksal worked upon Tevet much as the taste of a madeleine soaked in tea did upon Proust. It let loose reflections on the artistic calling and the regaining, through art, of that which has been lost; the connection with reality and the personal past. Memories of his parents, who came from the Eastern borderlands of the pre-Second World War Republic of Poland, bubbled up of their own accord, provoking reflection on carrying out a review of the storehouse of his own semantic memory, of looking differently upon the information held there. What was born was a question as to the randomness of the relationship between his own artistic searching and that of the Foksal artists, as well as to the semantic categories in respect of the meanings of ‘Israeli artist’ and ‘Polish artist.’ Does the complex and difficult history of Polish-Jewish relations, stigmatised by diverse individual fates, not determine the fluidity of unequivocal denotations, given that it elicits in him, one of the clearly articulated designees, a question as to the influence of political and historical borders on the defining of the traits included in the scope of the specified meaning?

Nahum Tevet was born in Kibbutz Messilot / Israel in 1946. He lives and works in Tel Aviv. From 1969–1970, he studied painting under Raffi Lavie. He has been teaching at the Bezalel Academy of Art and Design in Jerusalem since 1980. In 2001, he established the academy’s Master’s Degree Programme in Fine Art and led it till 2011. He has been honoured with myriad awards and his work can be found in a number of important art collections, including the Israel Museum, Jerusalem; the Museum of Modern Art, New York; the Kaiser Wilhelm Museum, Krefeld; the Robert Rauschenberg Foundation, New York; the FRAC Bretange, France; the Museum Moderner Kunst Stiftung Ludwig, Vienna; the Magasin 3 Stockholm Konsthall; the Tel Aviv Museum of Art; the Haifa Museum of Art; and the Herzliya Museum of Contemporary Art.