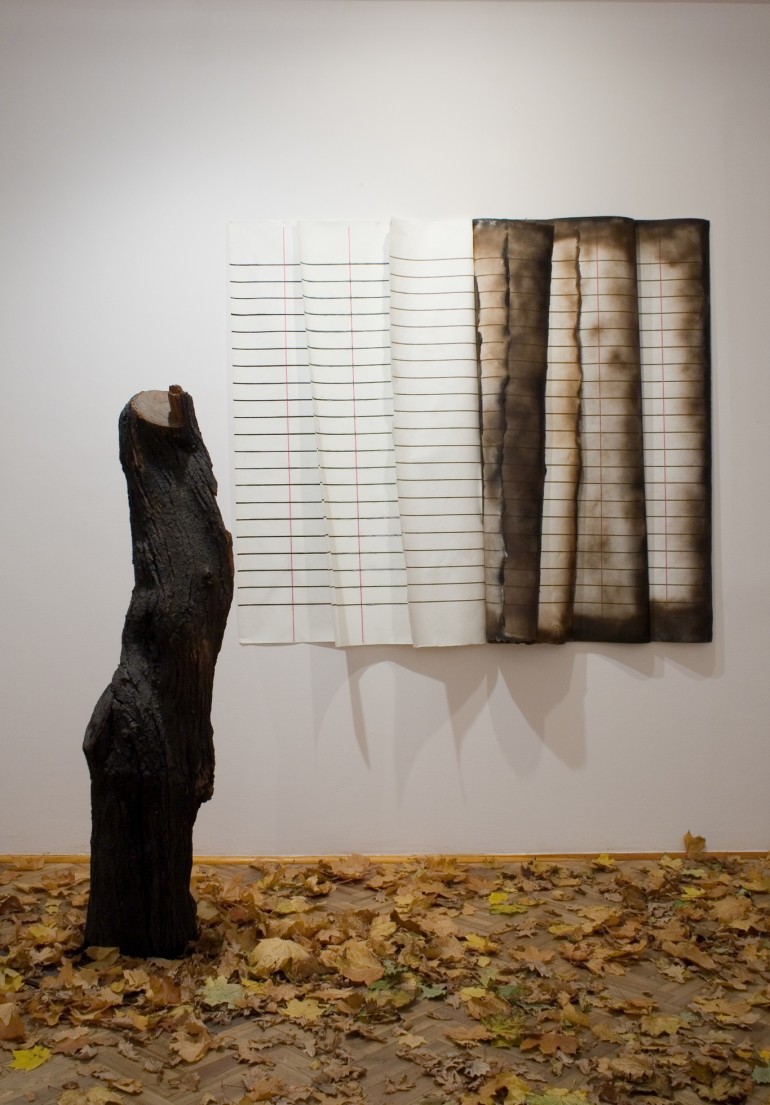 Maria Stangret studied painting at the Academy of Fine Arts in Cracow. She was a collaborator of Tadeusz Kantor, and an actress in his Theatre Cricot 2. She is a member of the Cracow Group Artistic Association. She debuted in 1962 at the Brinken Gallery in Stockholm. Her works have been presented at numerous one-artist exhibitions at home and abroad, for example at the National Museum in Cracow, the Zachęta Gallery in Warsaw, the Krzysztofory Gallery, Starmach Gallery, Gallery 86, Muzalewska Gallery, Kunsthalle in Baden-Baden, Germany, Galerie de France in Paris, Galerie d’Arts Contemporains in Orleans, as well as at many group exhibitions, for example during the Présences Polonaises at the Centre Georges Pompidou in Paris and the Dialogue at Moderna Museet in Stockholm. Being connected with the Foksal Gallery since the beginning of its existence (that is since the mid-sixties), she has presented her pictures on regular basis at one-artist as well as group exhibitions there. Moreover, she participated in many happenings and artistic actions that took place at Foksal Gallery. She lives and works in Cracow and in Hucisko – at the house that was built according to Tadeusz Kantor’s plans and devoted to be a museum of painting output of both artists.

At the turn of the fifties she practised painting that was inspired by the experiences of the informel art. In the sixties she made the cycle of works entitled Continental Landscapes which were leading to questioning the possibilities of painting. In result of such activity many para-conceptual works appeared in the seventies (The Chess Set, Boards, and Hopscotch). Painting-sculptural compositions created in memory of some well-known figures from the world of the arts, literature and history (dedicated for example to Tadeusz Kantor, Sergei Esenin, and Anna Frank), are characteristic for her art that has been realised since the eighties. Easel paintings presenting landscape motives are composed in them with characteristic elements: curling sheets from school notebook, tree stumps, and leaves.

Thanks to the endeavour of the Gallery 86 her never-ending story appeared in 2002 under the title Grandfather’s Memoir. It was a journal written by the artist with the use of automatic recordings since 1962.

Hommage à Danil Lider – which is currently presented at the Foksal Gallery – is a work that takes over the whole space of the gallery. The work has been already realised at the Starmach Gallery in Cracow in 2005.  In 2004 Maria Stangret took part in the opening of her monographic exhibition at the National Museum of Art in Kiev, Ukraine. During that stay in Ukraine she got to know the figure and activity of Danil Lider.

Danil Lider (1917-2002) studied at the Academy of Fine Arts in (then) Leningrad. In 1941, when the war between Germany and the Soviet Union broke out, he was sent far behind the Ural Mountains because of his German origin. He could return home and retake his studies only after Stalin’s death, in the end graduating from the Academy in 1956. Since the sixties he worked as a stage designer in various Kiev theatres, and since 1975 he directed the Chair of Composition of the Institute of Fine Arts in Kiev. Maria Stangret became inspired with Danil Lider’s works, among which the most impressive for her was the history of scenery design for the propaganda play of Welcome, Pripet, in which Lider foresaw the nuclear plant disaster in Chernobyl as early as in 1974. The arrangement of the exhibition entitled Our Orchard prepared for the International Stage Design Quadrennial in Prague at the end of the eighties was another work of his that impressed her most.

As Anna Baranowa wrote, “Homages” by Maria Stangret Kantor are most often presented in a syncretic form. Starting from her own formal predilections, the artist tries to melt them with the elements of form and content that refer to the persons, whom these works are dedicated to. Maria Stangret Kantor gets a lot of pleasure using the postmodernist technique of bricolage; the unity achieved in result of it makes a stylistically consistent impression, because all the elements are joined with feelings that unite them, that is empathy, admiration, longing and grief. The same is the case of her work “Hommage á Danil Lider.”