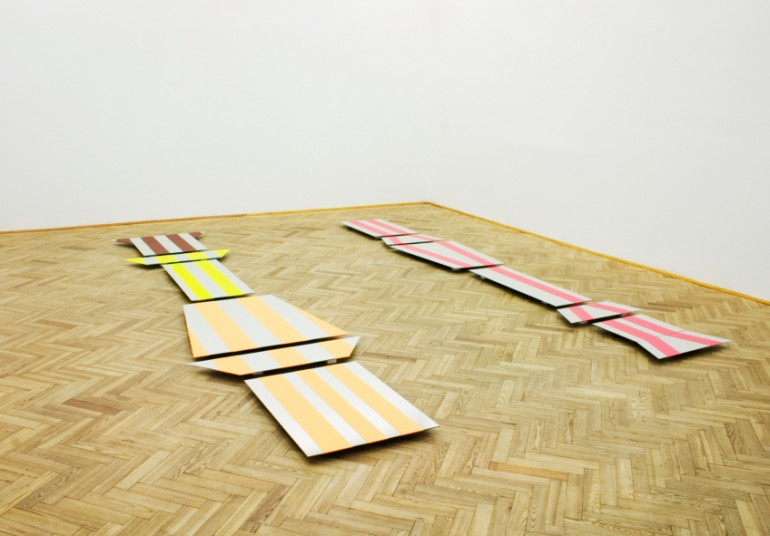 Andrzej Szewczyk (1950-2001) began working with Galeria Foksal in the 1970s. His first  exhibition here was Paintings from ‘The Peasants’ in 1978. At the time his artistic interests had to do mainly with the grammar of art (and that of painting in particular) and the strategies artists adopt towards the art world and everyday life. The works he produced in this period and idiom – early experiments, referred to as “painting on a scale of 1 to 1” or “homologous paintings” – were: Painting on Mirrors, Painting with the Rollers Used by House-Painters (“picture painting become one with painting walls”) done together with Tomasz Wawak, and Paintings from ‘The Peasants.’ Whereas Painting with Rollers and Paintings from ‘The Peasants’ might be termed “extra-mural” painting, Painting on Mirrors, the concept for which was first developed in the early ’70s, makes use of the phycical presence and rich symbolism of the mirror, or looking-glass, set up “face to face” with the painting, as well as vis à vis the painter and viewer. These three series of works from the 1970s have partially been preserved in various collections; Painting on Mirrors was reproduced by Szewczyk himself for a retrospective exhibition at Muzeum Sztuki in Łódź in 1988, and bits and pieces from the series are now in the collection of Muzeum Górnośląskie in Bytom; the remnants of Painting with Rollers were shown in 2005 at Galeria Muzalewska in Poznań; Paintings from ‘The Peasants’ have survived in Muzeum Górnośląskie which will be showing a spatial reconstruction of them in March alongside an extensive presentation of Szewczyk’s works from the museum’s holdings. The project in Bytom is being overseen by Marek Meschnik.

The present exhbition at Galeria Foksal was partly inspired by sketches for Painting on Mirrors made in 1971, one of them reading: “The shapes of mirrors (duplicating the illusion) – to transform architecture into illusion.” While the forms depicted are non-figurative, the sketches bear captions such as: “mountains painted on mirrors” or “clouds painted on mirrors.” Szewczyk also designed three-dimensional forms such as the cone he intended to cover with a layer of reflecting paint (“paint for protective layers” which like Painting with Rollers references Szewczyk’s abode of the time: in Szopienice outside of Katowice). For the purposes of the present exhibition, Szewczyk’s designs have been executed by three artists who had been closely associated with him: Marek Chlanda, Piotr Lutyński and Grzegorz Sztwiertnia. It is worth recalling that in 1998 at Galeria Foksal Szewczyk, together with Koji Kamoji and Piotr Lutyński, mounted an exhibition entitled 350 km Fast Car Ride, where they reproduced a polychromy designed by Henryk Stażewski on the 10th anniversary of the latter’s death. Nearly ten years later, that legacy of artistic meaning, attitudes and decisions transmitted from one generation to another has been taken up once more.

The Painting on Mirrors exhibition will be accompanied by an Essay for Voice and Double Bass entitled Ścinki [‘Shavings’] (alluding to a sizable group of works made with the use of coloured pencil shavings Szewczyk had shown at Galeria Foksal), performed on the day of the opening by Tadeusz Sławek and Bogdan Mizerski, both of whom had once worked with Szewczyk on similar projects blending text, music and the visual arts (Galeria Foksal, February 20, opening 19:30).