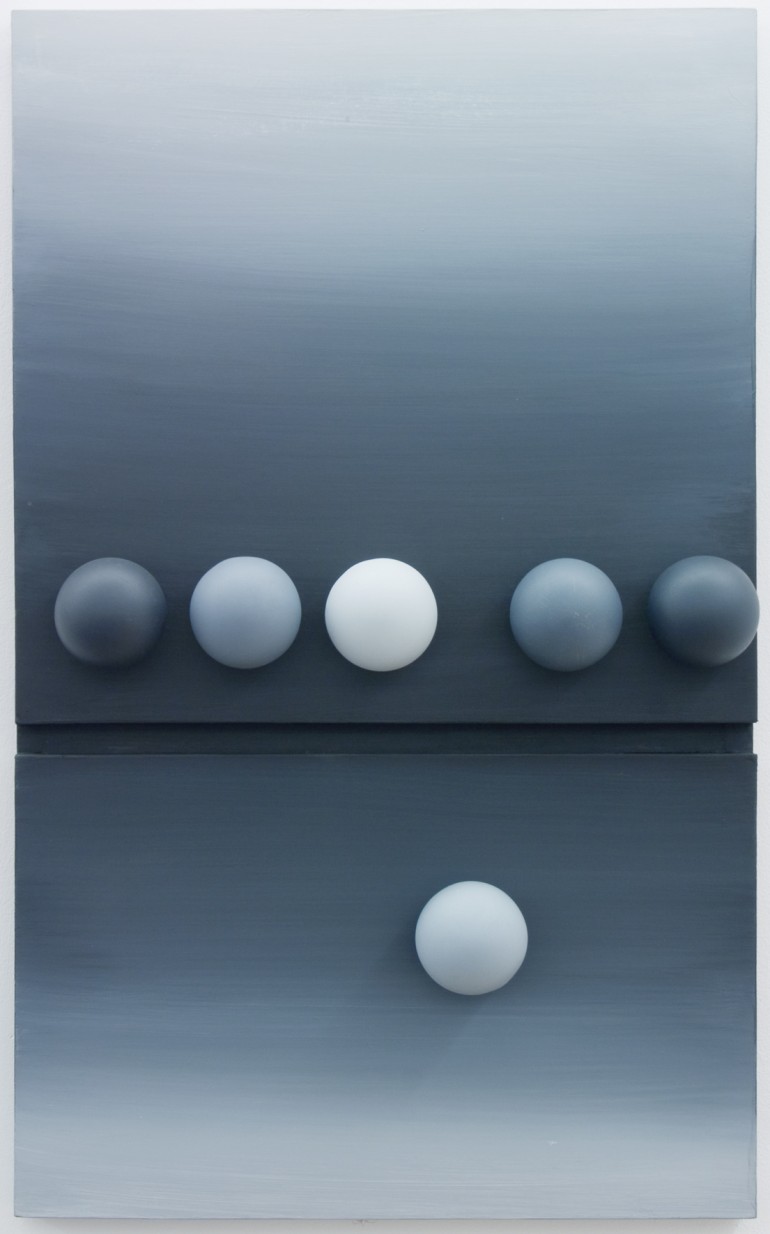 Zbigniew Gostomski (b. 1932), artist, Professor of the Academy of Fine Arts in Warsaw, was one of the founders of the Foksal Gallery. At his 1 April 1966 exhibition inaugurating the operation of the Gallery, he showed works of the Optical Objects series on which he had embarked in the late 1950s. Constructed of forms pointed with the contrast between black and white, they were reliefs conjuring up an illusion of space. The structure of the individual images was based on numerical ratios, which, in accordance with the rules of geometry, referred to the planned magnitude and optical effect of a given piece. As aptly observed by Wiesław Borowski in the catalogue of Gostomski’s first solo show at the Krzywe Koło Gallery in 1964, the artist differentiated his forms following a reversed correlation principle: the decrease of one value was accompanied by a correlated increase of the other. In the Optical Objects, the juxtaposing contrasted forms grow uniformly darker or paler depending on the point of culmination or attenuation adopted by the artist. The effect is much stronger than in the works of artists relying on the ordinary illusion of spatial play. Sharply delineated or suppressed, the borders, while guiding the viewer inwards the lights and shadows enforce on him/her a non-objective kind of perception, since the emerging and disappearing forms seem to be moving far beyond the area within the picture frame – to infinity.

The exploration of illusive space had prompted Gostomski to investigate the idea of uniting a work with its context, with the environment in which it was to function. His 1967 undertaking carried out in the Foksal Gallery, which embraced the whole of the interior, had quite eliminated real traits from the gallery’s physical space. Called Environment, the work was built of black and white areas, the verticals and horizontals of which the artist had contrasted with the actual interior outlines by ‘painting’ blacks and whites with the visible light of white glow-lamps arranged in layers on the floor. The black swinging platforms enhanced the impression of non-objective space.

The present exhibition harks back to the historic events outlined. We can find a fragmentary reminiscence of the Environment in the displayed static image of the floor, the intention of which is to question the symmetry of the interior as well as indicating the unquestionable objective spatial circumstances essential to the interior despite the subjective choice of form.

The exhibition also shows, for the first time in Poland, pieces of the Optical Objects series executed in the 1960s and 1970s, stored in private collections and the Galeria 86 in Łódź.

Zbigniew Gostomski’s oeuvre includes pieces marking the border between Modernism and neo-avant-garde in the history of Polish art, as observed by Piotr Piotrowski. His work is described as classical also because it concentrates on the specificity of visual matter and the visual sign, a classical painting issue. In what he does, the artist searches for the rule whereby to establish direction and measure, pattern and model, plus a system of relations between structure, scale and proportion. This is not a limiting system because there is an infinite number of solutions within the framework of the method adopted by the artist. The reception of his works is likewise an active operation, one adding a creative element to vision.

Gostomski’s present exhibition is a memento of the classical truth that the value of work standing to the ‘test of time’ is independent of passing fashions or temporary qualifications devised for the needs of advertising.

Painting on Mirrors
The Shadow Line (A Confession)