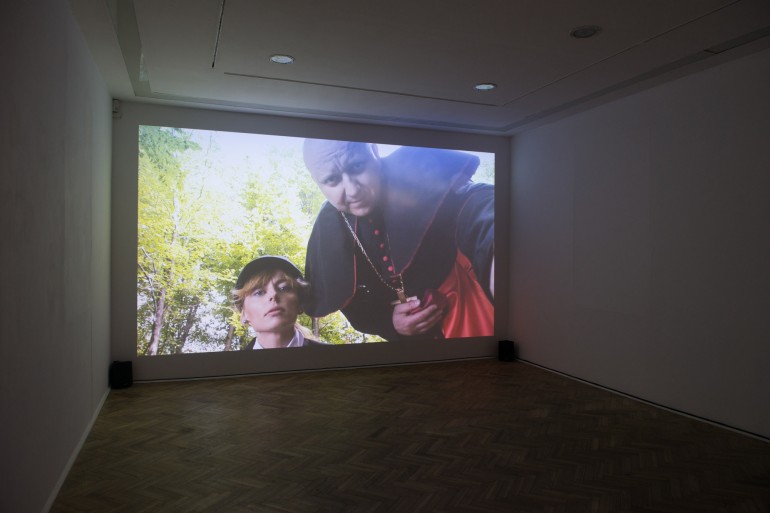 What might a Catholic cardinal and a mysterious beauty clad as a boy be seeking in the forest? This time it is neither wild mushrooms, nor berries, nor is it an arsenal hidden by the Home Army, or, rather, La Résistance, since the entire affair is being played out in France. No, what they are seeking is a perverse and uniquely malicious revenge. And even though it is said that vendetta is a dish best eaten cold, this time it is being served up piping hot… Can anyone or anything contrive to frustrate their foul machinations?  This you will see for yourselves when you watch “You’ll Never Walk Alone”, Maks Cieślak’s latest film, transcending all bounds with a universal story of people who have raised ars moriendi, vivendi et pedifollis amandi to a height unattainable by ordinary mortals.

The work of Maks Cieślak, winner of the prestigious Art Henkel Award in 2010, is astounding in the daring self-irony and uncompromising approach with which its author analyses the world of contemporary art. Thanks to his sparkling sense of humour, his creativity, which could have been viewed within the category of a vicious satire on ‘egghead, over-intellectualised curatorial and artistic attitudes, defuses the bomb within that milieu. Does the freshness and originality of his language protect him from the trap of the artistic establishment, the limitations and conventions of which it lays bare so unconstrainedly?

Maks Cieślak’s latest film, You’ll Never Walk Alone, which is to receive its premiere at the Foksal Gallery, plays a game with the full-length, feature film form. Yet nothing in this work accords with the norm, neither the length of the story nor the central characters themselves. Can the entire history of the Catholic Church be expatiated in the course of a few minutes? The film’s primary theme appears to be revenge. A revenge which is forbidden and inappropriate, but all the more desired and sweet for that and, finally, bringing catharsis and a sense of fulfilment. It transpires that one sinful, human reflex has the capability of mending wounds which have remained but partly healed throughout centuries of good intentions and zealous prayer.

Maks Cieślak was born in 1983 and studied at the Faculty of Arts of the Marie Curie-Skłodowska University in Lublin. In 2010, he became the winner of the prestigious Art Henkel Award. A year later, the Museum Moderner Kunst Stiftung Ludwig Wien (MUMOK) in Vienna and the Wrocław Contemporary Museum presented his work in a solo show entitled Art is a Forbidden Fruit Marmalade. He lives and works in Tomaszów Lubelski in South-East Poland.