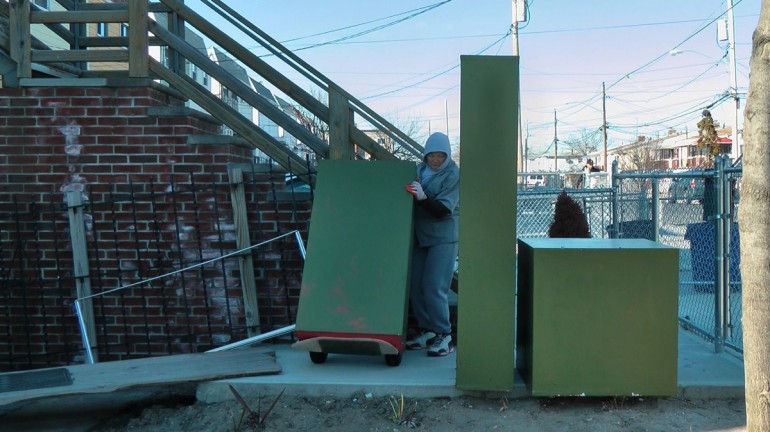 ROCKAWAY is Wojciech Gilewicz’s third exhibition at the Foksal Gallery, after solo shows in 2005 and 2009. Gilewicz’s trademark performative paintings are (not always legal) interventions in public space. Now, rather than displaying these paintings after the fact, Gilewicz has moved into interrogating the meaning of these performative interventions through the medium of video. Gilewicz’s video practice began around 2000, when began using it to document his performative painting projects—today, though, he uses video to create autonomous, visual artistic narratives.

His new exhibition at Foksal consists of three videos,”Rockaway”, “Cuboids” and “E22″. Together, they form a triptych, made in and around New York between 2001 and 2015, paying homage to Gilewicz’s creative origins as a painter as well as the complexity and value of (artistic) work. The three films ask questions about artistic fulfilment, production and over-production of art in a global economic slowdown and the roles of critics and art institutions—and ultimately, the limits of artistic activities themselves and the part they play in a wider social context.

ROCKAWAY is named for the peninsula that lies between the ocean and Jamaica Bay in the New York borough of Queens. It is also the name of a residential neighborhood there which began life as a beach resort for Manhattanites in the mid-1930s. Rockaway is ethnically and socially diverse, and bore the brunt of Hurricane Sandy, which hit the New York area in 2012, depriving many residents of everything they owned. It is also the home of Gilewicz’s mother, who left her native Poland for America more than thirty years ago to start a new life there. Her house, where Gilewicz also has his studio, was partially destroyed during the hurricane, and the artist documents the cleanup with his camera.

Through the story of his mother and the natural disaster which has redefined her life, Gilewicz examines immigrant life in the United States and disenchantment with the American Dream. He also silently observes the living conditions of artists in New York—a city with the world’s most powerful galleries and art institutions and where more artists live than anywhere else on the planet. He draws attention to contemporary artistic production and distribution, the actors engaged in it and the contexts in which it functions—contexts without which it can, in truth, rarely function at all.

The New York-based nonprofit Cuchifritos Gallery + Project Space will present Wojciech Gilewicz’s solo exhibition in a slightly altered form later this year (24 October – 29 November), with the primary emphasis on Cuboids, a video about his peformative painting and the three eponymous spatial, painted objects.

Both exhibitions will be accompanied by a catalogue with new critical pieces by independent film critic Ela Bittencourt (based in New York and São Paulo), Sara Reisman from The Shelly and Donald Rubin Foundation (New York) and Todd Shalom of Elastic City (New York).

Wojciech Gilewicz (b. 1974) is a painter, photographer, installation and performance artist and video-maker. His recent solo shows include the Kuandu Museum of Fine Arts in Taipei (2013), the Zacheta National Gallery Project Space in Warsaw (2013), the Manggha Museum of Japanese Art and Technology in Krakow (2012) and the Flux Factory in New York (2012). His latest group exhibitions include the Infecting the City festival organized by the Africa:Centre in Cape Town (2015), The Boiler / Momenta Art in New York (2014), the Queens Museum of Art in New York (2013), the Beit Ha’ir Museum of Urban Culture in Tel Aviv (2013), the Wroclaw Contemporary Museum (2012) and NURTUREart in New York (2012). In May 2015 Gilewicz is participating in the IDEAS CITY festival organized every two years by the New Museum in New York, under the title The Invisible City. He will also participate as part of a group show in Test Exposure, the 2015 edition of the WRO Art Centre’s Media Arts Biennial at the National Museum in Wroclaw, Poland.

Koji Kamoji, A Prayer to Being
Tadeusz Kantor, The Rough Drafts