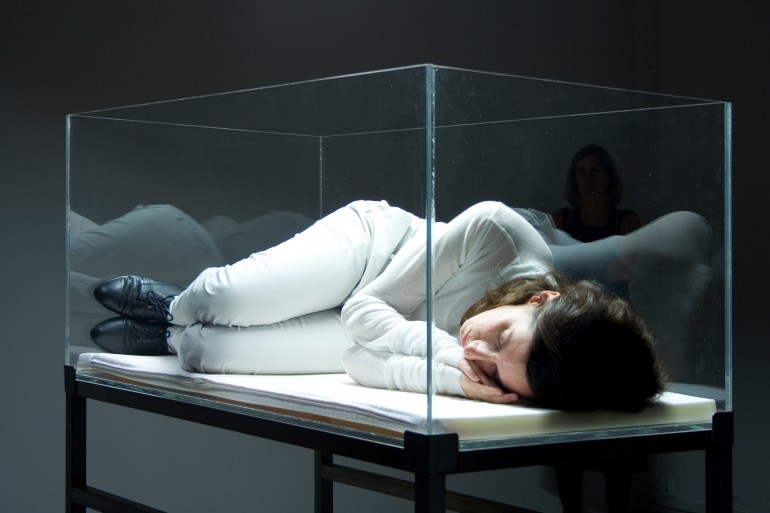 In the works which Nelly Agassi has prepared especially for the show at the Foksal Gallery, she used  various means of artistic expression (performance, sound, video, prints, and objects). During the performance which is prepared for the opening of the exhibition, a construction will appear in the middle of the main hall of the gallery, consisting of a metal cart and a transparent container (resembling a hospital incubator). A motionless figure of the artist, enlightened with the light from two fluorescent  lamps, will be lying in the container. An image displayed by a projector, presenting a delicate palm clenched into a fist and banging insistently on the wall appears will appear on the white front wall, as if unrealistically demanding to open the white wall. A somewhat neurotic sound – which calls to mind rapid heartbeats or the restless tick of a metronome – pulsates through the gallery, arousing a sense of restlessness and urgency in the minds and bodies of the audience. These are the poundings of the artwork in the process of its being born. Unlike real birth, however, the figure lying here is at once the mother and the baby, the artist and the artwork, the cause and the effect: a single-person think tank hard at work, wrote Adi Englman, the co-curator of the exhibition. The presentation of the Nelly Agassi’s work is accompanied by a facial composite of the artist constructed by a local police officer according to a description given by an acquaintance of the artist.

This imperfect and blurred image, resulting from the vision taken from the recesses of memory, reminds us that art is a matter not only of creation, but also of exploration; it is an incessant Sisyphean wandering into the depths of memory, imagination and feelings. This includes uncertainty, forgetting and rejecting, but also understanding, which allows the author to discover her own self and realise her works in due form, turned into objects, colour, time, and space. The essence of the exhibition is in showing the creative moment in which impulses and abilities of creation appear in their strongest dimension.

Nelly Agassi was born in 1973 in Israel. In the years 1995-1998 she studied at St. Martin’s School of Art in London, then at the Camera Obscura School in Tel Aviv and at Chelsea College of Art and Design in London. She is the laureate of many prizes and grants. Her works have been presented at the most prestigious galleries throughout the world. She collaborates with the Dvir Gallery in Tel Aviv, making artistic objects, films and performances. The themes that oscillate around the experience of holocaust and the struggle with the painful past run continuously through her projects. The attempt of defining the identity of the individual, but also the research of the collective memory, especially the historical memory that affects the younger generation of Israelites is essential for Nelly Agassi. Her works have been already presented in Poland, for example during the Singer’s Warsaw Festival of Jewish Culture in 2006 and 2007 in Warsaw, and at the group exhibition entitled The Memory of this Moment from the Distance of Years in the former Schindler`s Factory in Cracow, which was organised within the framework of the 17th Jewish Culture Festival in Cracow, 2007.