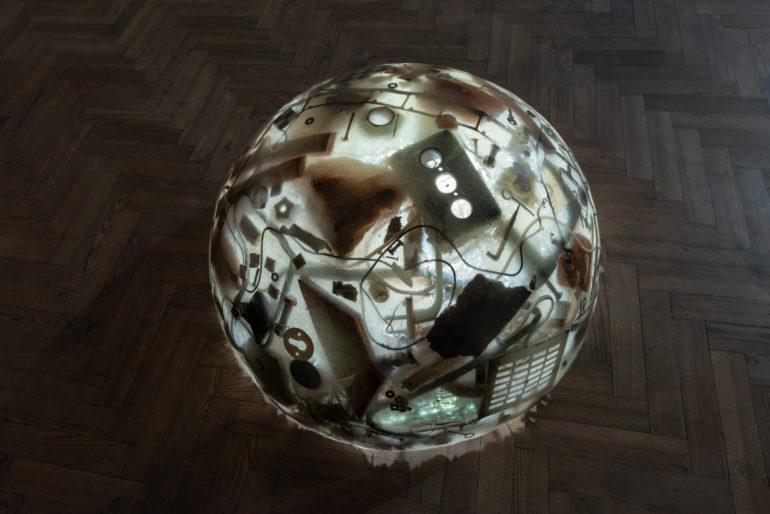 Zuzanna Janin’s “Home Transformed into Geometric Solids” exhibition will be her fourth solo show at the Foksal Gallery. ‘Home’ has appeared as a motif time and again in her work and seems to occupy a particular place amongst the themes she addresses. From the early nineteen nineties, it materialised in spaces and on furniture, sewn in raw silk by Janin herself for her spatial sculptures series “Corners” and “Covers”. Ethereal and weighty at one and the same time, it was an expression of the sense of temporariness, of desolation, which is symptomatic of homelessness. ‘Home’ revealed itself as a place of journeys away and of returns, a metaphorical beginning and end, as seen in her “My Way” video of 1998. It has come to constitute a kind of map of everyday life, a map upon which webs of recollections of places and people, events and emotions, from the past and the present, are laid down and superimposed, as captured in her video work “Dance for Nelly and Maria” (2016) from her “Dance as a Mapping Device” series, where she alludes to the saving of her grandmother and mother from transportation to Auschwitz in 1944.

In her latest work, Janin shares her personal reflections on the subject of her eighty-year-old family home, its inhabitants and its buildings. The house was constructed in the nineteen twenties to a modernist design by outstanding architect Kazimierz Tołłoczko and it is situated within the historical Kolonia Dziennikarska area of Warsaw’s Żoliborz district. It belonged to Janin’s family. Before the Second World War, it hosted outstanding representatives of the world of culture, including Stanisław Ignacy Witkiewicz, better known as Witkacy, and his friend, pianist Roman Jasiński. It went up in flames in 1944, during the Warsaw Uprising. After the war, it was rebuilt with great difficulty, although it proved impossible to reconstruct Tołłoczko’s pre-war design. It was endowed instead with a form typical of single-family homes in the Poland of the nineteen fifties. In the nineteen seventies an annex was added and her mother, the painter Maria Anto, set up a studio there. During martial law in the nineteen eighties, Anto kept open house, making the studio space available to debuting artists such as Jarosław Modzelewski, for instance, and throwing the doors open to cultural gatherings and events. Zuzanna Janin also had her first studio there. The renovated house is set to become a place for artistic gatherings and activities again in the near future.

The scattered scraps of this history which now stretches across almost ninety years, the vestiges of memories of place and people … rubble from renovation work, objects, mere splinters of the past found under floors and during the demolition of walls, family keepsakes gathered up … all of this has been preserved by Janin in semi-transparent, epoxy resin in the form of geometric solids which are assembled into an architectural-sculptural, spatial composition. This is supplemented by thirty photographic portraits entitled “Builders” which immortalise almost all the people who carried out the various stages of the building and renovation work.

As Janin herself spoke of her work in the catalogue to her exhibition at the Ujazdowski Castle Centre for Contemporary Art in 2000:
‘Seizing signs of memory is an energy that sparks hopes of eternal life, of overcoming oblivion, death, the void and nothing. The memory preserved in material signs or in their symbols also makes it possible to mix the past and the future. You can dart forward and then calmly wait for the present to arrive.’

She transforms the functional aspects of ‘home’, the ceiling structures, tiling, decorative elements, electric cables and so forth into geometric forms which allude to the work of the architect, for whom they are precisely the forms that constitute the outset, the thinking about and drawing of the solids and spaces of a building. The extensive history of her home, the people connected with it and the emotions that are her companions materialise in everyday objects… in a monogrammed, silver teaspoon, in a packet of SPORTY cigarettes, symbol of the communist era and long since departed from the shelves of shops, in ancient German bricks, revealed by demolition work, in old light switches, in a single block of wood from a parquet floor, in tiles, in keys, large and small, that once opened now non-existent doors and furniture… everyday objects which are united and enclosed in simple, geometric forms and in a striving to attain peace and a harmonious whole.
KK
English translation by Caryl Swift