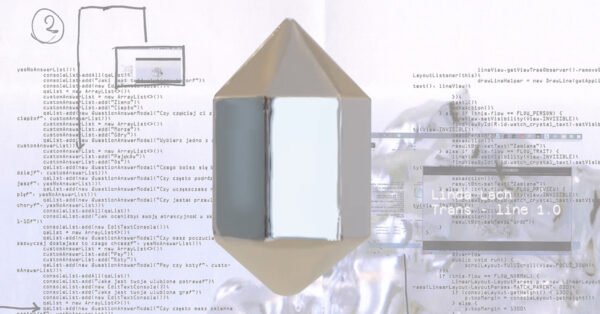 Trans – line is a program that measures the likelihood of swapping lives with another person. It distinguishes 21 areas most significant for human life, such as place of residence, associated identity, or relationship with parents. It makes possible to think of ourselves in an ideal way, without the things that bother us or that we don’t like about ourselves.

Participants of the weekend activity at the Foksal Gallery will have the opportunity to interact with the Trans – line application collecting data about users. Although this is the initial phase of the project, the code and concept of which are being developed, already at this stage the program will generate a digital equivalent of each participant who decides to take part in the experiment.

The goal of the project being developed by Linda Lach is to draw attention to the relationship between humans and databases. Access to massively stored personal data is difficult. Every day we encounter the world of the front end, the façade, and entering this world requires specialized knowledge and determination. The action at Galeria Foksal, like the entire project, will make user data more accessible and manageable. In the first phase of the project, carried out at the Foksal Gallery, the program will generate visual solids based on variable data provided by the users, making it possible to reflect on the relationship between man and his digital counterpart – the code.

The Trans – line project is a thought experiment that draws on the assumptions of pataphysics which was an alternative form of science that did not seek to achieve tangible results and relied mainly on doing science in a formal way, publicizing through conventional methods like symposia and publishing articles. It also paid attention to the logic of the scientific community and how scientific truths are formulated. Pataphysics deals with what is in between. It takes for granted that everything that can be thought of is possible, and has the same value as sorted data and definitions that have been accepted by science and tested empirically. When a physicist performs an experiment and gets a particular result, he does not consider all the other possible conclusions that could exist. He simply records the result of the measurement he made. And pataphysics says that all the answers to that experiment are equivalent and so exist in the world. Only looking between zero and one, for what is in between, is valuable according to pataphysics.

The text consists of statements by Linda Lach from an interview with Sonia Jaszczyńska (https://blokmagazine.com/thinking-is-action-sonia…/…) and conversations at the Foksal Gallery.

Linda Lach (b. 1995) in Warsaw. A student of the Academy of Fine Arts in Warsaw. Lach explores the intersection of science and art, looking for new ways to visualize the data she collects, for example, sketching graphs based on algorithms. She is interested in repetition and human relationships with the digital world. In data she seeks answers to questions about memory and identity in a world of false evolution. She processes acquired data by looping and splitting. She lives and works in Warsaw.