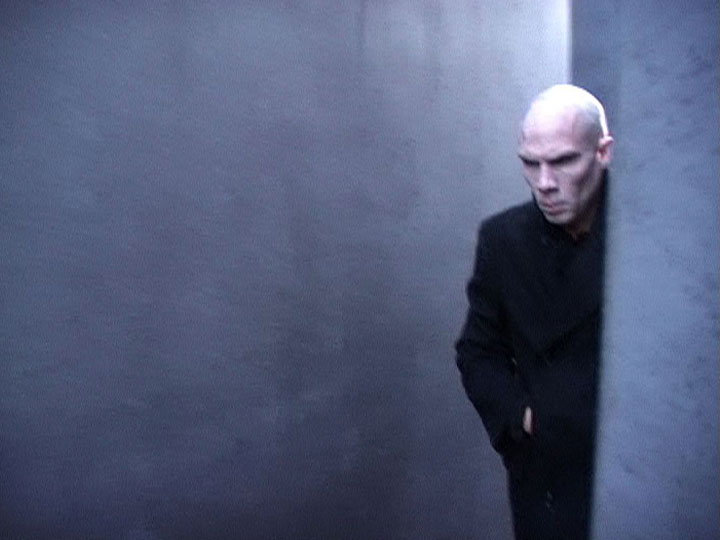 Jacek Malinowski began working on Nosferatu, The Fearful Dictator in July 2009. The project, which consists of two parts, Berlin and Warschau, was premiered in full at Warsaw’s Ochota Theatre in September 2011.

Nosferatu. The Fearful Dictator is a video remake inspired by two classic horror films based on Bram Stoker’s novel, Dracula; Nosferatu, symphony of horror (Nosferatu, eine Symphonie des Grauens, dir. Friedrich Wilhelm Murnau, 1922) and Nosferatu the Vampyre (Nosferatu: Phantom der Nacht, dir. Werner Herzog, 1979). Malinkowski has radically narrowed the original story down, focussing solely on two elements; the central character and the early plot line about the purchase of the estate. He is selective in his use of the features traditionally found in horror films, giving more weight to other genres, such as the documentary, and employing historical analogies in an attempt both to speak of the ‘horror’ which should be sought in reality, history and tradition and to render the incredible credible. In his essay written for Malinowski’s exhibition catalogue and entitled “Nosferatu. A Foetal Life of Evil”, Andrzej Wajs writes, The film bears the marks of a prophecy which each and every one of us could pronounce. Begun in 2009, before Breivika’s crazed deed and the Naziesque excesses which, today, in front of our very eyes, are exploding to the north-west of this county, right outside the doors to our homes, it is a record of something that has already been lived through time and time again, though still as topical now as ever it was.

Part 1, Berlin, is a picture divested of dialogue, its references to Murnau’s film lying predominantly in a visual convention which endows it with the aesthetic atmosphere of the German Expressionism of the 1920s. Yet it is only outwardly silent; the audience hears the rhythm of the central character’s footsteps and the sounds of a great city as it awakens. Nosferatu, played by Sean Palmer, appears in a unique setting; the corridor spaces between the concrete blocks of the Memorial to the Murdered Jews of Europe in Berlin. This is his interior. A symbol himself, he paces a symbolic space, penetrating it, lurking within it or even, perhaps, concealing himself there.
In Part 2, Warschau, brings verbal narrative into play. The action has moved to Warsaw, to the monster plunged in the darkness of his hideout. The audience is witness to a singular situation. The central character has no one to converse with. The camera’s dead eye watches. But it gives not a single response. Neither is there any chronology of facts in this ostensible dialogue. What there are, though, are unique reflections on space, on travel… and there is a predilection for war, for blood and for atrocity.
Jacek Malinowski was born in 1964 in Warsaw, where he lives and works. He graduated from the Faculty of Sculpture at Warsaw’s Academy of Fine Arts and then attended the Salzburg International Summer Academy of Fine Arts. 1995 to 1997 saw him continuing his studies in the USA, on an MFA course in Visual Arts at the Mason Gross School of the Arts, Rutgers University. He has been awarded numerous scholarships and grants by prestigious institutions, including the Kosciuszko Foundation and the Soros Foundation.
Before becoming involved in film, he created multimedia spatial installations using sculptural objects, photographs and projections. He discovered new potential in the medium of film, possibilities which enabled him to create works more complex in form and possessed of structure, logic and atmosphere, expanding the image by means of fresh space; the word, time, sound or the human element. As Malinowski himself says, […] I don’t know whether the word ‘film’ is still the appropriate one. I think perhaps that, here, what we’re talking about is the multilayered space of a plastic composition, extended in time, possessed of its own interior and with all the consequences and contexts that come with it.

Jacek Malinowski’s works have been shown at countless exhibitions, including Jacek Malinowski. Film Screening, at Bunkier Sztuki Gallery, Krakow (2011); Derangement, at the Center for Curatorial Studies, Bard College, USA, (2010); A Part of No-Part: Parallelisms Between Then and Now, at the CHELSEA ART MUSEUM, New York, USA (2010); The Summer of Youth at the Zachęta National Art Gallery, Warsaw (2010); Fitness, at the Arsenal Gallery, Białystok, (2009); Art of the 20th and 21st Century, at Muzeum Sztuki – ms2, Łódź (2008); Poza zasadą rzeczywistości (Beyond the Law of Reality), at Muzeum Sztuki, Łódź, (2008); The Celebration of Erwin Koloczek, at the Art Agenda Nova Gallery, Krakow (2007); Poza (Beyond), at Real Art Ways, Hartford, USA, (2006); W centrum uwagi (The Centre of Attention), at the Centre for Contemporary Art Ujazdowski Castle, Warsaw (2005); Prague Biennale 2, Prague, Czech Republic (2005); New New Yorkers, at the Centre for Contemporary Art Ujazdowski Castle, (2004); HalfAWoman, at the Zachęta National Art Gallery 2001.

Drawings and Quotations
everything; and 12 paintings