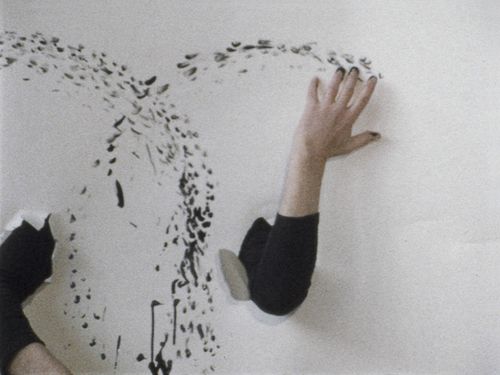 The Milan Grygar exhibition at the Foksal Gallery is the first presentation of this artist’s work to be held in Poland for many years. His previous show took place in 1974 at the Museum of Art in Łódź, when, at Ryszard Stanisławski’s invitation, the spaces of the Łódź museum played host to both an exhibition of Grygar’s works and a performance art work. This is by no means a chance reference to the 1974 exhibition. The show at the Foksal will focus primarily on a closer look at that period of the artist’s work, namely, the late 1960s and early 1970s, a period deemed to be one of the most significant and most pioneering in Milan Grygar’s artistic quest. The exhibition will be showing multimedia documentation of Grygar’s most important actions from 1969, 1973 and 1982 and this will be supplemented by photographs of the events, as well as his Acoustic Drawings and Drawings/Ground-Plan Scores from that period.

Milan Grygar’s exhibition takes its own, particular niche in the history of the Foksal Gallery in the 1970s. An endeavour at that time to arrange an exhibition of works by artists from the former Czechoslovakia met with a refusal from the authorities of the People’s Republic of Poland. Paradoxically, consent was given for the gallery to mount a show of artists from Western Europe and the USA, but not for contact with artists from the so-called ‘brother socialist nations’. This was reserved exclusively for the large, official institutions. The Foksal arranged an exhibition of Czech artists, albeit unofficial in that there were no invitations and no announcements or advertisements. And among those artists there figured… Milan Grygar. Now, in redressing the balance after more than forty years, we are also recalling that event for the benefit of researchers into a ‘blank spot’ in the history of art in Poland in the 1970s.

Milan Grygar (born 1926) the Nestor of Czech art, numbers among the pantheon of Central European art. His work is an exploration of the relationships between image, sound and space. Around 1965, he stopped working on abstract painting and began to create acoustic drawings and drawn events in which recorded sounds formed as important a part as the visual elements. He defined these works as ‘scores’ and an interesting thing about them is that many of them were handed over to professional musicians for performance. As Martin Dostál emphasised, “A great many of these works were performed in concert, not only at home, but also across Europe and the United States. At the time, Milan Grygar, along with John Cage, was one of the pioneers in the field of using sound in art.” In the 60s and 70s, one of his major performance art works was forged, a work during which he delved deeper, presenting an interdependence of sound and visual art. The piece was performed in major institutions in cites such as Brno (1968 and 1973), Łódź (1974), Prague (1985) and Gent (1986). His works, drawings and scores, often accompanied by recordings of music, have been shown at countless exhibitions in the Czech Republic and abroad, including a show at the Drawing Center in New York (2001).

Geometria dyskretna. How to Make Our Ideas Clear
Comfort #8