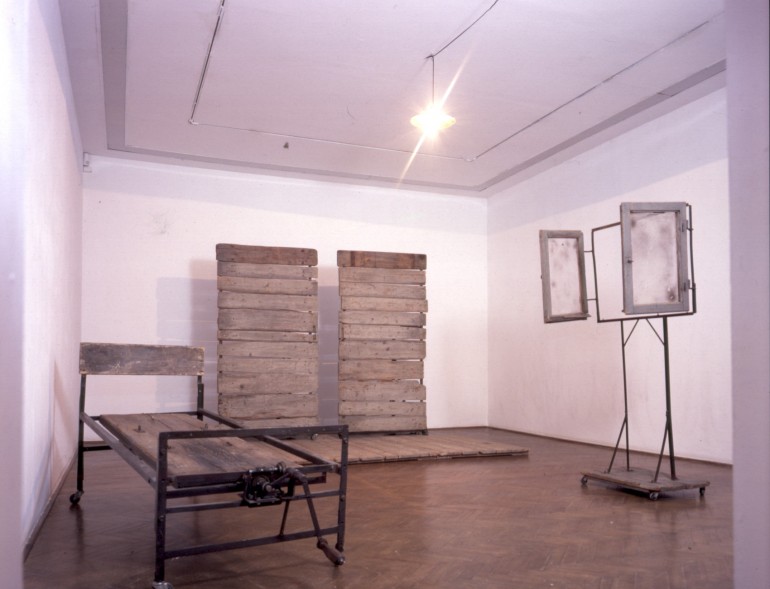 Organized on the thirteenth anniversary of the death of Tadeusz Kantor (1915–1990), the exhibition refers to Wielopole, Wielopole, one of the most excellent works of his Cricot 2 theatre (premièred in Florence in 1980).

Wielopole near Tarnów is Kantor’s birthplace. Set in ‘the room of his childhood’ which, ‘called back to memory, was dying continuously’, Wielopole, Wielopole was another supreme production elaborating on the idea of the ‘Theatre of Death’ after the Dead Class, 1975.

Though Tadeusz Kantor’s company ceased to exist almost upon the artist’s death, it has a lasting place in the history of major achievements of the art of 20th-century theatre. It continues in the living memory of those who could see it in Poland, Europe and other continents during the almost two hundred ‘wanderings’ of the Cricot 2 ensemble. It survives in the collective memory of art historians and people interested in art as a unique and legendary phenomenon.

Arranged by artists and critics connected with the Foksal Gallery, ones who have had direct contact with Kantor’s work, the present exhibition is not an attempt, not even a fragmentary one, at reconstructing the theatrical shape of Wielopole, Wielopole. The ‘theatre objects’, such as the door, the window, the bed, which appeared in the production in roles not far removed from the leads, certainly bear a ‘theatre mark’ and remain silent witnesses of Kantor’s theatre, but they no longer convey the experience of that time. Placed in the gallery space, detached from their ‘theatre splendour’, they are all the more evocative of their original aura and autonomous existence, not so much bringing back an image of Kantor’s theatre as bringing his absence home to us. In this sense, the objects on display do not only refer to Wielopole, Wielopole, but to all works of his theatre and his art as a whole. Anselm Kiefer has remarked on there being no props in Kantor’s theatre but objects which, even before entering the stage, were loaded, irradiated by the artist, which, apparently, had a life of their own and a will of their own, and there was paradoxically more life in them than in the ‘impersonators’. They seemed to have been used for ages and they sighed under the pressure of memories.

Next door to the show section featuring authentic relics of Kantor’s art, in the gallery’s archive (and office) room a video of a film recording of Wielopole, Wielopole is being played with the volume turned down. Who saw the production, is aware that this form of registration, though an invaluable visual rendering of Kantor’s art, is merely a two-dimensional image, helpless against the power of the unique scenic action experienced directly; helpless against any theatre but especially this. From this archival space, isolated voices and sounds of another world, that of media illusion, reach the exhibition.

Shown in the gallery’s vestibule are documents, posters and information leaflets from the heyday of Wielopole, Wielopole and the time of Cricot 2’s world tours.