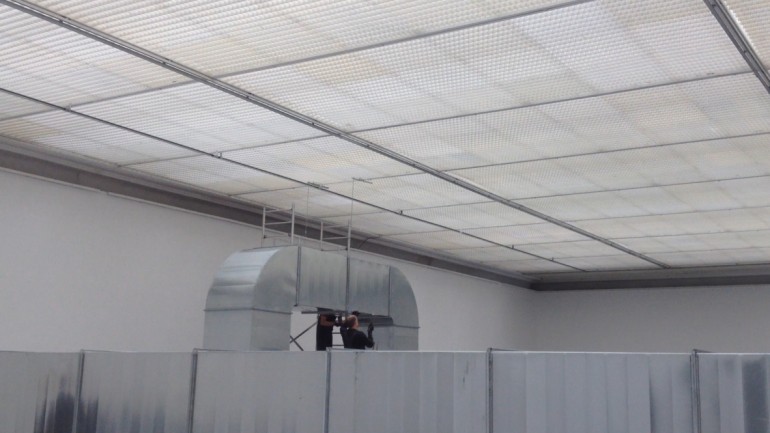 Colour is emptiness; emptiness is colour[1]

The images by Arkadiusz Sylwestrowicz on show at the Foksal Gallery could be assigned to the stream of painting which engages in endeavours to go beyond the orders mapped out by the tradition associated with that sphere of artistic activity. Yet the phenomenon of the image in current art is usually defined as a visual communication by means of which the artist formulates their message. It can thus take on various forms which often intermingled or are mutually complementary, such as film, video, computer art, painting, photography and so forth.

Sylwestrowicz’s art treats of both these matters. On the one hand, it seems to remain closely related to tradition. On the other hand, it is opened up to experimentation which strives to broaden the spheres of the painting’s activity. Sylwestrowicz uses atypical sets of materials, such as pure pigment, industrially manufactured paints, sheets of acrylic glass and his own binders, creating structures of fluorescent colours which, in interacting with their surroundings, in other words, with light, space and time, undergo metamorphoses. Sound also comes into play, derived in close connection to the paintings on display and the ensuing space.

In the instance of works combining painting and music, critics refer to the phenomenon of synaesthesia, in other words, parallel perception, where the stimulation of one sense or aptitude by an experience also evokes an experience typical of another sense. One example of this is chromosthesia, also known as sound-to-colour synaesthesia. At the same time, correlations of colour and sound have long been a subject of interest not only to painters, but also, or perhaps primarily, to musicians and composers. At this point, reference might be made to Alexander Skriabin and his chromosthesia, where sounds or consonance trigger an impression of colour or vice versa, with colour evoking the sensation of sound. Skriabin set out to create a work of art entitled Mysterium, which would combine music and dance with the play of coloured lights and scents. Between 1909 and 1910, he composed his fifth symphony, Prometheus. The Poem of Fire, Op. 60, for small orchestra, choir and clavier à lumières, a ‘keyboard with lights’, which served to obtain colours. The work was written in preparation for Mysterium and Skriabin’s intention was for the music to be accompanied by coloured lights set in motion on a screen by the clavier à lumières, which had colours assigned to it on the basis of a circle of fifths and a spectral circle.

For his Axis series, Sylwestrowicz collaborated with Robert Barański, EngD., of the AGH University of Science and Technology in Krakow. The result of their work was an algorithm which transformed painting into various sound frequencies. On that basis, composer Jacek Grudzień then created a musical work where the sounds correspond to the features of Sylwestrowicz’s paintings.

There is also an echo which resounds in those of his paintings where a mathematical pattern is united with sound. It is the echo of a search for a method, a means whereby it will be possible to create a painting and the sound corresponding to it in an ‘assured’ way, on the basis of a mathematical system. The genesis of this mode of thinking about art can be sought in the very distant past, in the golden ratio, for instance, which is also known by a variety of other names, such as the golden number or the divine proportion, and appears not only in works of visual art and architecture, but also in the music of Johann Sebastian Bach, amongst others. Reference might also be made to the Fibonacci sequence and its connections to nature, music and art. In our own backyard, as far as contemporary art is concerned, the sequence has been a theme of deliberation for artists such as Zbigniew Gostomski, although, as he remarked in an interview with Wiesław Borowski, “I search for objective laws and all I find are laws for my own use”.[2]

In one interview, Sylwestrowicz said that:

In my art, I’m leaning more and more towards the dimension of the sensual. These works almost force the viewer to stretch out a hand and try to touch them.

In truth, his works should, above all, be touched; they should be seen in the spaces of a gallery, for they are impossible to appreciate on the screen of a monitor or telephone. In this, too, lies his response to a question; are the dilemmas bound up with painting of any significance or have they become archaic in the post-modernist era?

Arkadiusz Sylwestrowicz was born on 27th of July 1971 in Łódź́. He studied in Academy of the Fine Arts in Gdańsk. At present he works as an assistant in painting’s faculty.

SoundLab is an inter-disciplinary performance art group created during a series of sound-art workshops at the Galeria El Arts Centre in Elbląg. In their work, the group uses diverse techniques to produce sound and vision, often relying on sampling and audio feedback from the spot where the performance is presented, as an attempt to fill in or delineate physical space.