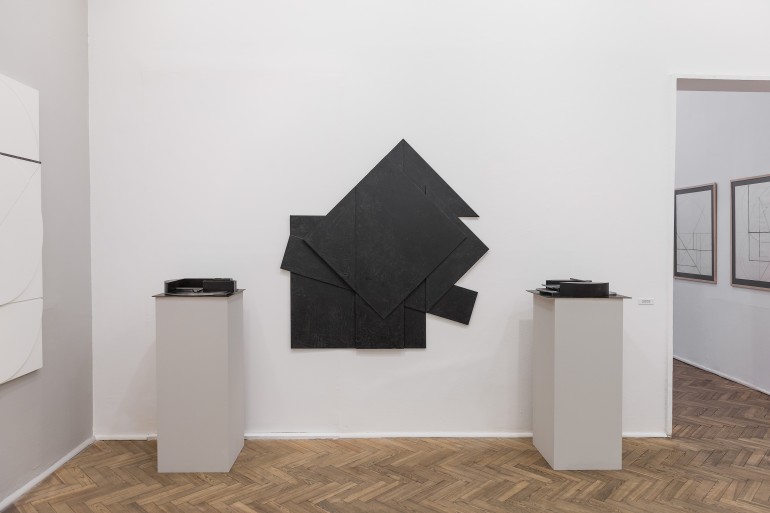 Exhibition in cooperation with the Czech Center in Warsaw
and with support of the Zdenĕk Šklenář Gallery, Prague

The Stanislav Kolíbal exhibition is the first presentation of this distinguished artist’s works to be given at the Foksal, even though the gallery’s directors and curators initially sought to hold just such a show back in the 1970s. Sadly, attempts to exhibit Czech or Slovak artists or, indeed, those hailing from the other ‘socialist’ countries, met with trenchant opposition on the part of the then Ministry of Culture. Nevertheless, with Ryszard Stanisławski, the director of the Museum of Art in Łódź, working in close collaboration with the Foksal, Polish-Czech contacts were lively enough to afford those artists the opportunity of becoming familiar with the Warsaw gallery. It should be pointed out that, in the case of the museum in Łódź, this initiative bore fruit in the founding of a collection of avant-garde Czech and Slovak works which were banned in Czechoslovakia after 1968. This current exhibition thus colours in that blank spot in the Foksal’s history, though it is not, of course, an historical show. Entitled White, Black, Grey, it is consists of more than twenty works specially selected by the artist and displayed in a spatial composition which is also of his making. The works are mainly drawn from his most recent period, but allusions to the 1970s can also found amongst them.
Stanislav Kolíbal numbers amongst the world’s leading representatives of Cold Abstraction, using the language of geometry in his artistic creations. Critics have read references to Conceptualism, Minimal Art and Arte Povera in his works. Their processual nature precludes their being pigeonholed as a category of sculpture. After all, in the course of the last half-century, that genre of art has gone through a fundamental transformation, to which Kolíbal has made his own, major contribution. As far back as the 1960s, he arrived at the concepts of object and installation through the individual evolution of his art. In the 1970s, when it was impossible for him to arrange public showings, he created extraordinary installations in the privacy of his own studio.
The visual aspect of the spatial composition within which the sculptural works were presented in the exhibitions he set up have become a quality much esteemed by critics. As Urszula Czartoryska wrote in 2000:
For this remarkable artist, rational thinking about space revitalises the universal sense of the human being’s movement in the surrounding universum, the sojourn of human thought in an astounding, perpetually renewed labyrinth. Here, the labyrinth means the spiritual journey through the world. These values remain relevant no matter when or where, along the Vltava as well.
Stanislav Kolíbal’s art is well known to the Polish public. He has shown his works at several solo and collective exhibitions held at the Museum of Art in Łódź and the National Museum in Wrocław, amongst others. He also took part in the prominent international Construction in Process 1981 exhibition which opened in Łódź not two months before the declaration of martial law and became a manifestation of international artists’ solidarity with Polish society.
Born in Orlová on 11th December 1925, Stanislav Kolíbal is one of the most important figures on the modern Czech art scene. In the 1950s and, in particular, the 1960s, when more or less every avant-garde trend in world art made an appearance there on the wave of the relative political thaw of the times, he already numbered amongst its most potent personalities. Alongside Václav Boštík and Adriena Šimotova, amongst others, he was a high-profile artist in the legendary UB 12 Group. Founded in 1960, the group’s activities were banned by the communist authorities in 1970 and Kolíbal was not to return to official artistic life until the Velvet Revolution.
From 1990 to 1993, he taught at the Academy of Fine Arts in Prague. In 2012, his works were presented at a grand retrospective exhibition entitled Another World, held at Prague Castle in the city’s Hradčany district. He has participated in such renowned events as the 5th Sculpture from Twenty Nations exhibition at the Guggenheim Museum in New York, the Paris-Prague exhibition at the Musée d’Art Moderne de la Ville de Paris, the Europa Europa exhibition in Bonn and Painting and Sculpture Today at the Indianapolis Museum of Art, to name but a few. His works are held in a number of collections, including the Guggenheim Museum, the Tate Gallery in London and, in Poland, the Museum of Art in Łódź and the National Museum in Wrocław.

Our special thanks are owed both to the artist himself and to Mr Petr Janyška, the director of the Czech Centre in Warsaw

Drawings. An Attempt at Baptism
Spitting to Abstraction