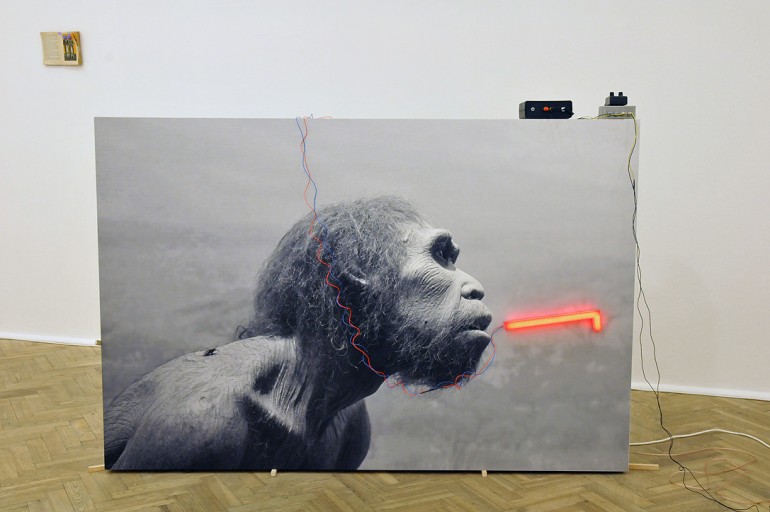 Kuba Bąkowski’s new project, Spitting to Abstraction, on show at the Foksal Gallery, makes conscious use of a hybrid fusion of figures, effigies, likenesses, symbols and signs, a fusion bordering on the absurd. Bąkowski’s questing pivots on images which are a powerful presence in visual pop culture and originate from spheres outwardly far-removed from each other, such as natural history, comics or political myth. Thus, here, we meet the Homo sapiens from the exhibition at the American Museum of Natural History in New York, The Incredible Hulk, hero of comics and film and a likeness of Abraham Lincoln presented in the form of an absurd novelty souvenir. Spitting to Abstraction is the search for a state where a given manifestation suddenly takes on a concrete shape, form and character, only to degrade and return to its former amorphousness a moment later. The status of the hybrid emerging in this abrupt process is ambiguous, it is fleeting and precarious; as a prototype of a new hybrid form, or bastard, it is something between a phantasm and a real being. The separate parts of the project share a common element in the use of sounds connected with speech and its hypothetical origins, as well as alternatives to linguistic means of communication; in a way,  it is as if the hybrid, once emerged, makes its existence manifest in attempts at both self-definition and communicating with the external environment. The nature of these sounds of expression is various, arising from the elements making up the project’s individual parts and from their final structure. The exhibition’s auditory layer also encompasses paralinguistic sounds uttered by the prehistoric, primitive humans and communication built through fragments of film dialogue. The animal-like noises emitted by a human trying to lure a stag into a trap compete with the sounds produced by a mechanically kinetic sculpture-cum-letter. Kuba Bąkowski graduated from the Faculty of Multimedia Communication at the University of Fine Arts in Poznan, obtaining his MA in 2001. He lives and works in Warsaw. His work is best defined as experimentation on the borders of photography, sculpture, video and performance and he is mainly known for his analytical, ironic and intentionally absurd creations, which reflect a reality full of paradoxes. He has shown his works in both solo and group exhibitions at the Zachęta National Gallery and the Centre for Contemporary Art Ujazdowski Castle in Warsaw and has taken part in group exhibitions at the Museum Moderner Kunst in Vienna, the Museé d’Art Moderne in Saint-Etienne, Artspace Sydney, the National Centre of Contemporary Art in Moscow, the Palazzo delle Arti Napoli, and the Chelsea Art Museum in New York. He has been awarded grants by the Ministry of Culture and National Heritage of Republic of Poland, the Trust for Mutual Understanding (USA) and the Adam Mickiewicz Institute (Poland).