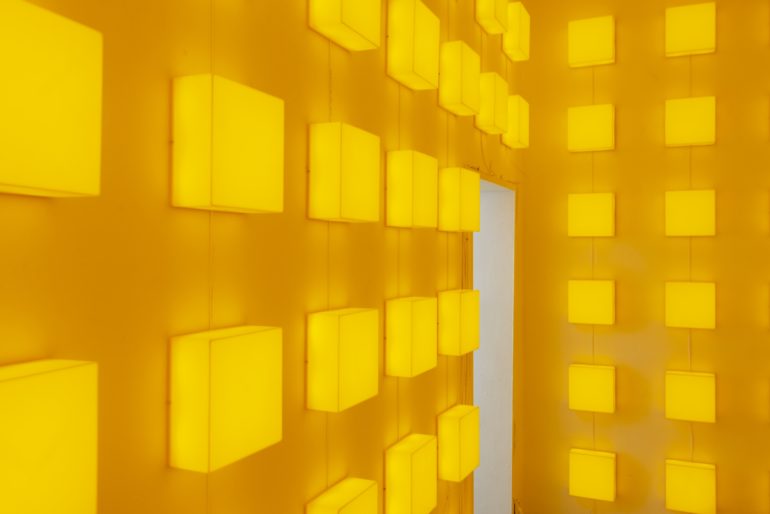 The inspiration for Leon Tarasewicz’s exhibition at the Foksal Gallery stemmed from the artist’s visit to Jerusalem. The composition filling the entire space of the gallery consists of pulsating, single-color, yellow lights. Psychologists argue that the color yellow effectively attracts attention and is therefore used in warning signs. While yellow lights do not indicate a direct threat, as red lights do, they impart more of a message of possible danger, a notification that warrants caution. In nature, the yellow coloring of certain insects and reptiles also signifies danger. The color is also associated with many positive attributes, like being close to the sun, identified with summer and fun, which is why the color yellow is especially popular in toy advertisements. However, psychologists also indicate that an excess of yellow and various shades of it may give rise to tension and irritation.

Yellow, which is present in the landscape of Jerusalem and which appears only sporadically in the history of Polish painting, has a metaphorical meaning for Tarasewicz. As he says in the interview: “So, yellow—mystical, with time energy pulsing for so many centuries.” In the history of European painting, yellow has most assuredly developed an ambiguous symbolism. Associated with the sun, warmth, joy and gentleness, it was a symbol of intelligence, wisdom, divinity and sanctity, even in the form of yellow halos around the heads of saints. However, it has also had a different connotation. It was the color of deception, betrayal, greed, shamelessness and hostility. In old paintings, Judas was portrayed wearing yellow garments, and in Italy during the Renaissance period, courtesans and Jews were ordered to wear yellow signs.

Inside the Scrovegni Chapel in Padua, Giotto di Bondone made a fresco cycle depicting the Kiss of Judas around 1305. Judas stands in the center of the painting, dressed in a long yellow robe, and as he prepares to kiss Christ, he embraces him, covering him almost completely with the yellow robe. This work of the proto-Renaissance painter probably reveals the double symbolism of the color yellow most glaringly. Christ and Judas seem to be clad in one yellow robe. The riddle of Judas’ misdeed, however, is that by kissing Jesus in Jerusalem’s Garden of Gethsemane, he betrayed him by bringing soldiers, but his deed had to be done… so that the Holy Scripture would be fulfilled. Christ knew that he would be handed over by his disciple, and that this must take place in order for him to save the world. The yellow robe, embracing both figures, becomes a color of betrayal and falsehood, but also of wisdom and sanctity. At the same time, the color yellow acquires a mystical character.

Christian theologians stress that in a mystical experience, what counts the most is what the person feels, because God becomes an emanation of light penetrating the soul. Jerusalem is a holy city for three monotheistic religions. Believers in each of them believe in one God, yet is he the same God for all of them, since they have fought and are still fighting among themselves on His behalf? Maybe the appearance of the color yellow in the Jerusalem landscape did not appear accidentally, but occurred as a result of some universal, mystical determinism?

Milada Ślizińska—curator of Tarasewicz exhibitions in the Foksal Gallery as well as outside—agreed to be the catalog’s editor. Due to her exacting knowledge of the artist and to the fact that she has been following his creative path since 1984, she has selected the authors of the texts and has made the selection of photographs. However, above all, she carried out excellent research work in the chronology of events and correcting erroneous entries that have appeared in various publications and in archives regarding the works of Tarasewicz. In her introductory text, Ślizińska has presented the paintings of Tarasewicz in the context of his activity at the Foksal Gallery using a diachronic approach, giving this entire publication the significance of important source material for contemporary-art researchers.

The essays of Wiesław Borowski and Gabriella Cardazzo are equally as essential. Borowski describes his contact with the artist and his art, while also revealing the background of the gallery’s activities during the difficult period of the 1980s. He depicts the beginnings of cooperating with the artist in the context of that complicated political, social and cultural situation in Poland. He also introduces more personal accents (descriptions of events, incidents), which give the cooperation an added dimension of friendship and mutual benefits arising from joint meetings.

The essay that Gabriella Cardazzo wrote gets even more personal. The author describes how meetings with the artist and the circle of people associated with the Foksal Gallery influenced her interests and inspirations as well as fascinations, not only with Tarasewicz’s paintings, but with this entire region of Europe. The first meetings between Borowski and Cardazzo along with Tarasewicz date back to 1984 and 1985. These happened almost at the time as the artist’s official debut, shortly after he graduated from the Warsaw Academy of Fine Arts. This is more than 30 years of acquaintanceship. Probably of varying intensity, but undoubtedly the shared experiences, reflections and dialogues are still waiting for their description.

A valuable complement to the above-mentioned texts is the interview conducted by Jakub Banasiak with Tarasewicz. In conversation with the critic, the artist defines what the gallery—with its historical, spatial and even transcendent values—has meant for his artistic explorations. He also explains changes to his original plans and presents the assumptions and inspirations of the current exhibition.

This project was co-financed by:

the Office of the Marshal of the Mazovia Voivodeship in Warsaw