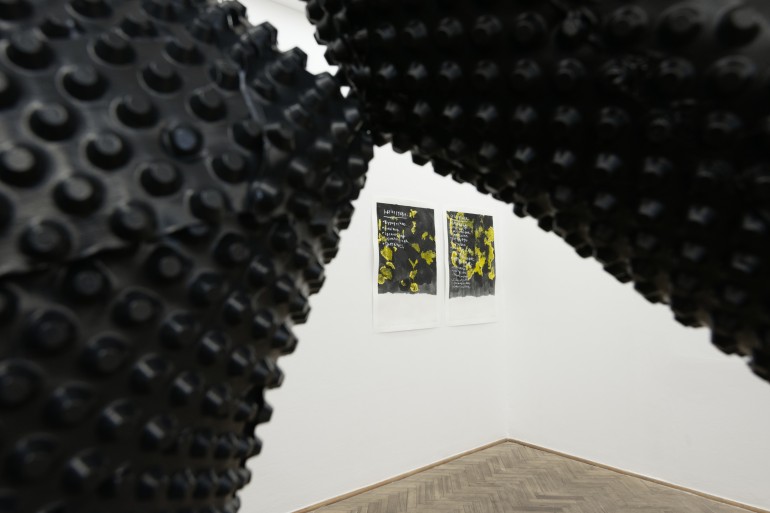 APL315 is the pseudonym of one of the most distinctive personalities representing the young generation of artists in the sphere of contemporary Ukrainian art. He lives in Odessa, the city he hails from, and in Kiev, where, as he emphasises, he is more intensively in touch with current artistic life. He has been active in the field of graffiti since 2000. His work can be found not only in Ukraine and the states of the former Soviet Union, but also more or less right across Europe and even in the Far East, in South Korea. A typical feature of street art is its mutability and temporariness, which is why APL315 is happiest when painting the wagons of goods trains which, given that they travel vast distances, offer a reach for the ‘exhibition’ of his works which is potentially far wider than that of any gallery or museum.

Since 2006 or thereabouts, APL315 has also shown his works in galleries. He refuses to paint murals at exhibitions, though. He most often creates his works on loosely stretched, large-format canvases. At times, he turns to smaller formats, painting on paper. However, the techniques he employs are always drawn from graffiti. He mixes various types of paints, such as oil and acrylic or aerosol and marker pen. At times, he creates sculptures, using readily available materials like planks of wood, wire, sticky tape, foil and paper; these sculptures are a three-dimensional materialisation of his graffiti. Fairly recently, he also began creating drawings in the form of tattoos.

Although his style could be placed within the ‘trash graffiti’ trend and is aesthetically akin to the work of the CAP (Crew Against People) group founded in Prague in 2005, APL315 has unquestionably developed his own individual, original, inimitable painterly language; his works are predatory, raw, provocative and critical of the reality around him and he continually experiments with the form of the image and texture of the surface. An entymologist by education, he openly admits that his great inspiration is the world of insects. The biomorphic forms of his predominantly abstract compositions are often inspired by his observations of the shapes and colours of that world, but what also interests him is the collective behaviour of insect communities, which he compares directly with human behaviour. Another inspiration for his art is electronic spatial music in the broad sense and it frequently forms a background to his exhibitions.

In his Almost Human exhibition at the Foksal, APL315 is endeavouring to trace out a parallel between human and insect communities. He perceives numerous similarities in the way they function and spins a reflection springing from his observation of human communities, their patterns of behaviour and their reactions, which are conditioned by diverse factors and circumstances. As he himself maintains:

Contemporary humans are often unaware that that they are living in a system connected with a particular world view. In the contemporary world, making a calculated choice to ‘pupate’ like an insect, withdraw from active participation in life and nurture your illusions in comfort and in peace is a fairly common attitude. It often seems to us that folding our wings and ‘pupating’ is easier and less painful. But the relief that attitude brings is only ostensible; it deprives us of the possibility of expressing ourselves through active interaction with the world and of making our opinions heard.

Pupate and wait for change, a behavioural pattern typical of insects, directly associated with people who deliberately opt for a passive mode of life, hiding behind ordinary activities, behind sleeping, eating, working and various other repetitive doings, using them as a ritual which serves as a screen protecting them from an active, responsible life. In the wider perspective, these signs of regress arising from a lack of personal will and consciousness of the self and from remaining safely within one’s comfort zone lead to irreversible social consequences.