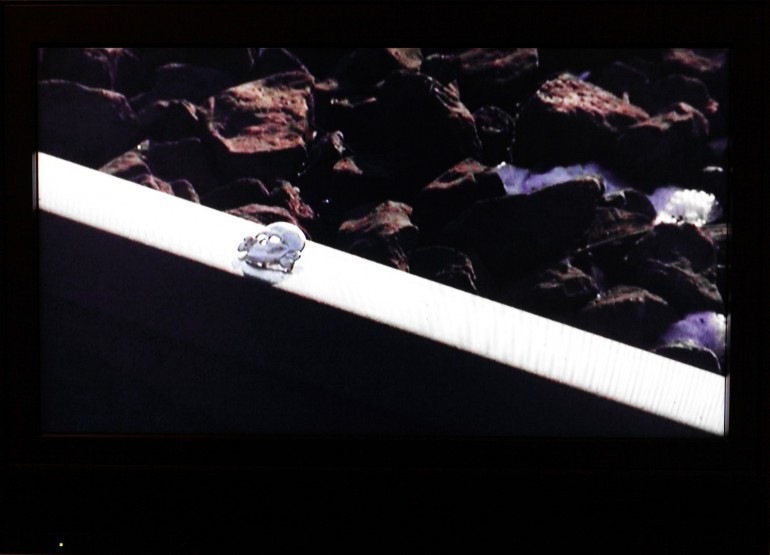 Born in Bolzano, Philipp Messner studied under Michelangelo Pistoletto at the Academy of Fine Arts in Vienna, graduating in 1999. The mountain setting of his home town has undoubtedly had an influence on his perception of three-dimensionality and perspective. His work focuses on an analysis of the process of human perception. He primarily depicts objects in space in works which frequently revolve around the concept of symbolic forms and their functions. At one and the same time, he also plays with the viewer’s visual perception, introducing elements which construct a subtle tension between fiction and reality.

Messner’s exhibition at the Foksal Gallery presents works constituting an endeavour to examine the relationship between the schematic cultural images contained within phrases and symbols so widespread as to be almost hackneyed and their ‘literal’ translation into visual form. A three-channel video projection shows a donkey straining toward a carrot. Dangling from a stick, it stirs him into movement, though it remains immutably and ever beyond reach. Messner also calls upon both national and nationalistic symbols from the Second World War and, using the power of nature, neutralises and dims the significance with which history has burdened them.

Phillipp Messner worked on both the underlying concept and the exhibition itself during a six-month residency at the artists-in-residence laboratory of the Ujazdowski Castle Contemporary Art Centre. The Foksal exhibition, Messner’s first solo show in Poland, is entitled On Gravitation. In this, he makes reference to the circumstances experienced during a residency; the artist is plunged into a new place and that place, together with the process of immersion in its history, begins to create a specific gravitational field which translates into a perception of the place itself and the nature of the works created within its ambits.

The exhibition has been organised in co-operation between the Foksal Gallery and artists-in-residence laboratory Centre For Contemporary Art Ujazdowski Castle with the support of the Museion Bolzano.