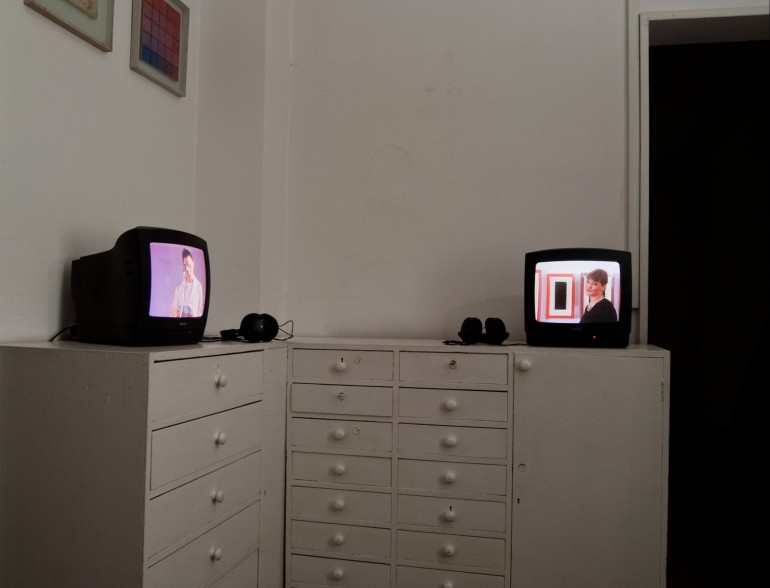 Andrea Fraser is a key figure of ‘critical art’ and art criticism: the radical and engaged performer. Her most interesting, neo-conceptual gestures of the institutional critique addressed to the art world and its distinctions [specially the modes of the symbolic violence in the field of cultural production] were developed mostly between 1989–2005. Artist’s exhibition at Foksal Gallery presents few of them — video installations and performance documentations: May I Help You? (1991, in collaboration with Allan McCollum, version performed by Ledlie Borgerhoff at American Fine Arts, Co., New York, Allan McCollum’s exhibition Plaster Surrogates); May I Help You? (2005, in collaboration with Jeff Preiss, version performed by Andrea Fraser at Orchard, New York, first Orchard exhibition Part One); Inaugural Speech (1997, performed by Andrea Fraser following the official speeches by politicians, inSITE97, San Diego / Tijuana); Kunst Muss Hängen [Art Must Hang] (2001, installation with painting and DVD projection, Martin Kippenberger’s speech from 1995 performed by Andrea Fraser at Christian Nagel Gallery in Cologne in 2001); Official Welcome (2003, performed by Andrea Fraser at her opening at Kunstverein in Hamburg, including fragments of Yilmaz Dziewior’s curatorial statement). Since years the artist is devoted mostly to academic life and psychoanalysis. In 2005–2008 she co-founded and contributed to collectively run project Orchard in New York. Presently she is Professor at UCLA University of California, Los Angeles (Department of Art / New Genres). In her recent presentations she combines academic and performative practice. Fraser’s method reflects her ‘critical techniques’ employed since the ‘80s, blurring the boundaries between self-reflection, self-presentation, re-enactment, confession and seduction. Andrea Fraser is also an author of articles on social and institutional critique in specialist periodicals: October, Texte zur Kunst, Social Text, Critical Quarterly, Documents, Artforum, Grey Room. Extensive anthology of her texts was published by MIT Press in 2005 as Museum Highlights: The Writings of Andrea Fraser, edited by Alexander Alberro, with foreword by Pierre Bourdieu. Andrea Fraser’s work, as writes Bourdieu, is able to ‘trigger a social mechanism, a sort of machine infernale whose operation causes the hidden truth of social reality to reveal itself.’ Footnote 3: ANDREA FRASER is a third, subsequent edition of the Footnote — an on-going project by Barbara Piwowarska, which commenced in October, 2010. Its first stage was conceived as Footnote 1. Phantom Limb at Centre for Contemporary Art Ujazdowski Castle, Warsaw, and the second as Footnote 2. Correction at Silberkuppe, Berlin. A footnote is a tool referencing existing institutions, projects and statements in the format of micro-exhibitions employing the methodology of margins. All presented videos courtesy of the artist and Galerie Christian Nagel