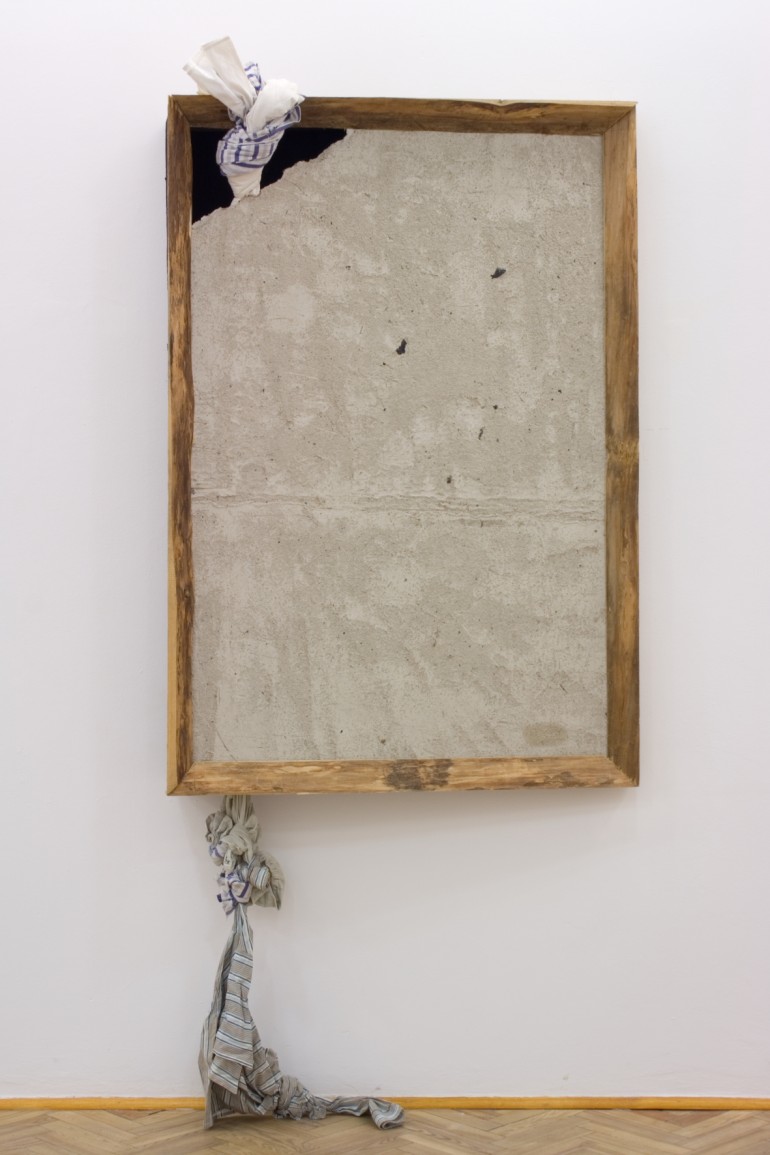 The title hints at numerous meanings. It is enigmatic enough to make any number of readings possible
Pomimo – in the meaning of ‘alongside’ – we pass over the picture indifferently and focus on what is beyond it.
Pomimo – in the sense that, despite everything, it is a picture.
Pomimo to – in spite of the fact that it has been annihilated, has fallen from its pedestal as a cult object, has been maltreated and compromised, it stubbornly resumes a kind of substitute form, like a surrogate, a stopgap, debased to the most simplistic, primitive (in the sense of its execution) form. I note only its presence.
Pomimo to – in spite of this, it clings on, exists – why? What for?
Simply so that once again the crime of manipulation can be carried out against it.
Pomimo to – in spite of the fact that something is going on there, I escape from it. I try to return, unsuccessfully and hopelessly. I make use of it instrumentally, I veil it with my own impotence or impure games and intrigues. I put it on show, making of it an alibi for my deeds.
Pomimo to – in spite of the fact that it is a picture, nevertheless, this is not so clear to the end. My purpose is fairly ambiguous. As if I wanted to conceal my true intentions and, in creating a picture in such a form, say, “What’s the problem?” – after all, it is a picture. If I create a picture, then I am an artist. Only this picture, is kind of not quite all there. It lacks something, pomimo to – in spite of the fact that has everything a picture ought to have. A frame, a surface, colour, texture, etc.
Pomimo – in spite of the picture, I pretend to a ‘non-painting’, to painting non-painting.
Pomimo –  in spite of the picture’s physical existence, I make out that it is insignificant, passed over.
The method of its execution indicates its insignificance, its inferiority. Done anyhow, with paltry materials which are easily obtained in a hurry, to hand, hard by – particularly in the village were I prepare them and then fashion them in my studio.
There is a disinclination in this, a reluctance toward fancy perfection, toward creating a work of art as a luxury object.
Roman Siwulak

Roman Siwulak was born in 1952 in Krakow, painter, actor, teacher. He graduated from the Academy of Fine Arts in Krakow. He is active in various disciplines of art. He was a member of Tadeusz Kantor’s Theatre Cricot 2 acting company from 1970 till 1990. He took part in all performances of this theatre. He was connected with French groups: Compagnie Singuliér, Théàtre du Radéu, Circus Klotz from 1994 till 1998. He lectured on theatre in: Scuola Dramatica di Paolo Grassi (Milan 1993), Scuola di musica per il teatro Orte Ospitale (Rubiera 2008). He is a member of Italian group – Teatro Orchestra di Moni Ovadia since 2000. His solo exhibitions have been presented in Galeria Krzysztofory, Otwarta Pracownia in Krakow, Foksal Gallery in Warsaw. He also took part in group exhibitions e.g.: Polish Avantgarde 1910-78 – Palazzo delle Esposizioni – Rome 1979,5 wystawie kolekcji Małopolskiej Fundacji Muzeum Sztuki Nowoczesnej – Cricoteka Kraków 2008.