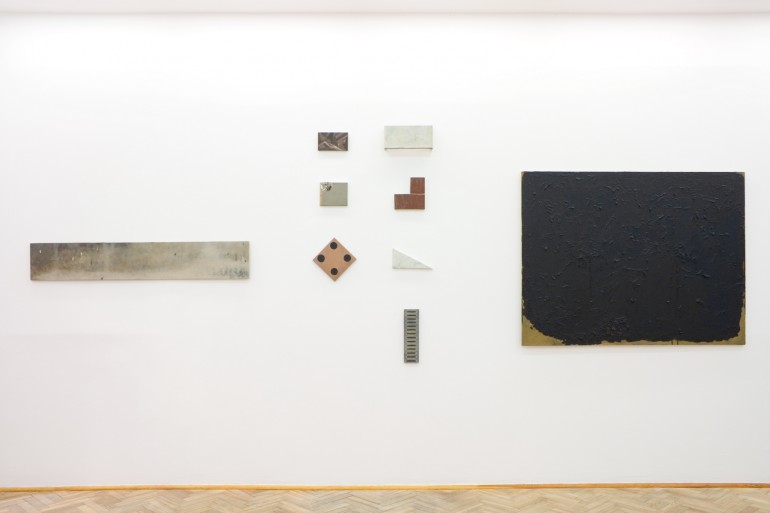 Wojciech Gilewicz’s current exhibition at the Foksal Gallery, his second here, differs vastly from what he has accustomed us to in his previous work. The show comprises paintings created for earlier projects; however, this time he presents them as wholly abstract works, removed from the context in which they originally appeared as realistic painted reproductions doing duty for elements of the surrounding world. In general, they imitated fragments of the walls and windowsills of buildings, or masqueraded as paving stones. They could only be found with the help of a special map, prepared by the artist himself. So perfectly did they meld with reality that they remained completely invisible to the uninitiated viewer. Gilewicz’s work to date has been a junction, a meeting place for painting, photography, installations, and videos documenting his artistic actions. The final work was a fusion of numerous elements, acquiring significance only within the context of the whole, even when transferred to the setting of a gallery’s interior. This was what happened with the show which Gilewicz prepared for the Foksal in 2005. The work fused painting, photography and reality; a view from a window in the gallery. The pictures inside the gallery, three irregular figures, had to be read in conjunction with the photographs presented alongside them. They showed three canvas stretchers in the park, before painting, and after, along with a view of the park from the gallery window. Now Gilewicz goes a step further. He deprives his paintings of context, imposing the constraints of artistic form on them. It no longer matters whether the works first functioned against the urban fabric of Warsaw, Sanok or Paris, or whether they once became a part of the New York metro, Warsaw’s Zacheta National Gallery of Art or Ukraine’s Ivano-Frankivsk Museum of Fine Arts. What matters now is their independent existence, the paintings and the paintings alone. What new meanings do they acquire? Set against the backdrop of painting’s entire tradition and the history of that medium, how do they speak to us? And finally, does Gilewicz’s work provide simple answers to these questions? Or does it also provoke us to further reflection?

Born in 1974 in Biłgoraj. He studied at the Academy of Fine Arts in Poznan (1994-1996) and then in Warsaw, where in 1999 he earned a degree in painting (with an additional degree in photography)      A painter, photographer, author of installations and videos. Lives and works in Warsaw and New York.
The leitmotif of Wojciech Gilewicz’s practice is a desire to show how relative and changeable our perception of the surrounding world is and how fluid the boundaries between reality and its artistic representation can be. Gilewicz’s practice invites a reflection on the mechanisms governing our perception and on the cultural determinants of the way we see things. (www.gilewicz.net)
His solo exhibitions include: CCA Ujazdowski Castle / Laboratorium, Warsaw; Fondation Deutsch de la Meurthe, Paris; Foksal Gallery, Warsaw;  Museum of Fine Arts, Iwano-Frankiwsk;  Contemporary Art Museum, Saint Louis.
Group exhibitions: National Museum / Krolikarnia, Warsaw; Zacheta National Gallery of Art and Zacheta / Kordegarda, Warsaw; Live Box at Ravenswood, Chicago; CCA Laznia, Gdansk;  Real Art Ways, Hartford; Muzeum Sztuki, Lodz; Pianissimo Gallery, Milan; White Box Gallery, New York; Sculpture Center, New York; Zendai Museum of Modern Art, Shanghai; now and soon: CoCA Znaki Czasu [ Lucim lives on ] Torun, Poland; Museums of Bat Yam [ Factory ] Bat Yam, Izrael; Museum of Contemporay Art [ Art in Public (non) Places ] Belgrad, Serbia and TAV Taipei, Taiwan.
In April 2009 CCA Ujazdowski Castle in Warsaw published an art book [ Oni / Them ], presenting a photographic cycle of Wojciech Gilewicz’s doubled self-portraits.

Pomimo obrazu
How to explain performance to living flies