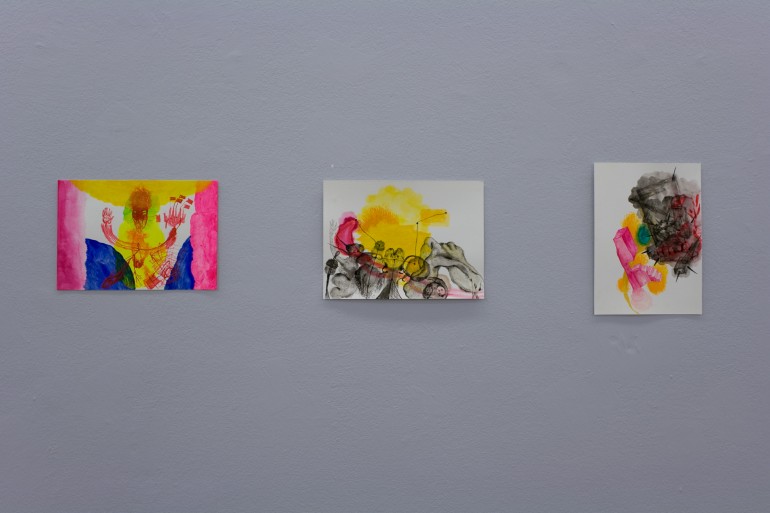 Katja Shadkovska was born in St. Petersburg, Russia, in 1973. An artist and curator who also engages in art criticism, she lives and works in Warsaw. In 2001, she began studying under Leon Tarasewicz at the Faculty of Painting at the Warsaw Academy of Fine Arts, graduating in 2006.
In her exhibition at the Foksal, Shadkovska presents an extensive collection of colourful gouaches and pencil drawings, complemented, and not for the first time, either, by quotations drawn from literature, music or film.

In his commentary to her Draw and Don’t Fritter Time Away exhibition, held at the Academy of Fine Arts in 2011, curator Stach Szabłowski wrote that, for Shadkovska, art (…) is closer to the practice of breathing life into beings than it is to creating images received as representations of objects or concepts. Many of her works awaken associations with the iconography and aesthetics of historical surrealism, though this is not a trail that will finally lead us to where we would like to be as we seek a way to read what she creates. After all, her aim is not so much to give voice to her own subconscious as to enable her works to speak. They give every appearance of being like sponges, soaking up any and every facet of reality, both those deeply rooted in the material world and those which belong within the order of the imagination and spirituality.

I see all of my works as living beings, coherent, entire and with an individual life of their own. All I do is help them to emerge, Shadkovska declares. She emphasises the fact that all the works presented in the Foksal exhibition are strictly bound up with the body because they arise from body exercises, the physical and, at one and the same time, the mental, the two being wholly inseparable. It is her conviction that contemporary art is focussed more on AIMS, on strategies leading to the attainment of an objective. An aim demands action and she herself sets store by non-action, or by OTHER action, this being her manifestation of “the caprice of control.” In drawing, she exercises her body, treating it as a receiver and transmitter of creative energy, surrendering herself to impulse, catching chance elements of everyday life, art or pop culture, quotations, which she processes, juxtaposed in phantasmagorical forms, building the framework of a world for them, a world wherein they will live their own, individual lives. At the same time, she is aware of her actions. Despite declaring that her choice of quotations was spontaneous, the vast majority speak of the possibility of OTHER action/thinking. One of her favourite quotations, drawn from the American science fiction writer, Clifford Simak, reads: “does it not occur to you, gentleman,” said the geologist, Herbert Anson, that this something may turn out to be neither the first, nor the second nor third? It’s highly possible that what we saw bears no relation to any concept known to us at all.