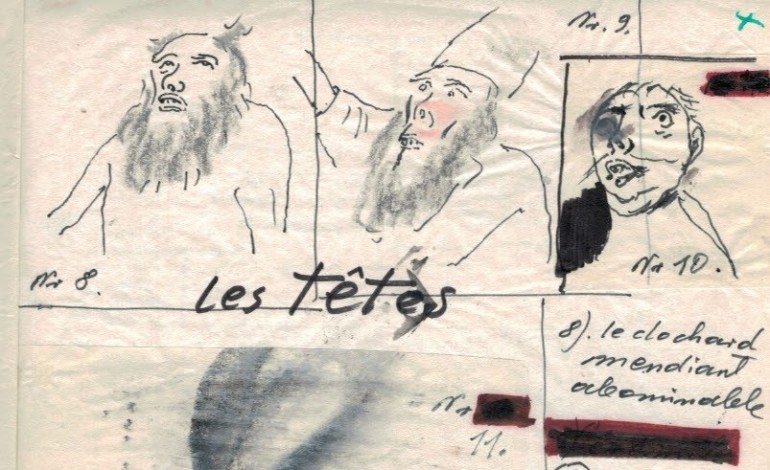 In the second half of the nineteen seventies, Tadeusz Kantor worked on an exhibition for the Foksal Gallery in Warsaw, an exhibition which was never to make it as far as the vernissage. It was conceived as a show of his ‘rough drafts’; the notes, jottings, various types of drawings and so forth which he made while working on his theatrical productions. The idea was to show them as enlarged photocopies.

As Kantor himself explained, the intention was:

[…] not to treat these remnants as some kind of record/ or the fringes of creativity, private and commentative/ materials and monographs/ to eliminate this aspect of tracking one’s own/ activities and gestures/ to strip the scrap of paper of its ‘originality’, of what constitutes a document’s value as a keepsake, its bibliophilic worth/ not the originals but common-or-garden copies, enlarged/ enlargement effaces semanticity and subjectivity,/ turning the attention toward the formal qualities/ these odds and ends become abstract/ through the action of time passing/and vitiating everything, as well.

Kantor would never relinquish the notion of showing the exhibition. He filed the scenario away, complete with a note to posterity:

If someone considers that it would be worth accomplishing, perhaps by dint of a particular sentiment toward my work, then looking through this material will suffice …

The Rough Drafts exhibition at the Foksal consists of some hundred or so prints of his jottings, notes and so forth, all of them greatly enlarged.

The principal focus of the show turns on concepts which were of enormous significance to Kantor; the essence of creativity and works of art. The nineteen sixties saw a worldwide debate on this topic, a debate in which his voice resounded with unusual innovativeness. Whilst engaged in organising his Anti-Exhibition at the Krzysztofory Gallery in 1963, Kantor wrote:

It was my own, personal discovery, this recognition of all the ‘attic’ regions of the consciouness, the storehouses of memory and the elevation of what goes by the name of the lumber room of our conscious actions, as creativity. […] In order to express this in stark terms, let us say that, paradoxically, in the reception of creativity, the most inspiring and spiritual moment of the great mystery of creation was eliminated. What was thrown to the wolves for consumption was merely a vestige of this process, no more than a trace and, in that trace, we strive to discern a reflection of the Big Bang. In vain.

This definition of the processual nature of art clearly distinguishes Kantor from process art as created by Robert Morris, for instance. However, what was wholly innovative was his transferral of a discourse grounded in the visual arts into the sphere of theatre. Here, Kantor was inarguably a precursor.

Nowadays, when art has also appropriated theatre and film to its own ends, while giving up on defining the work of art itself, this aspect of Kantor’s creativity is well worth both recalling and bringing to the fore. This holds true not only because it is usually passed over in works devoted to his theatrical activities, but also because it is indiscernible in scholarly writings on contemporary visual art.

The scenario drawn up by Kantor demonstrated just how important a sphere historical notes were to him. They were also a springboard for his actual creativity, which was centred around the topics of recollection and memory.

This exhibition of his ‘rough drafts’, which is being mounted on the occasion of the centenary of his birth, is not simply one more event ‘in veneration’ of the great artist. Neither is it a presentation of archival documents. It sets out to turn attention to the need to identify current culture with the concepts proposed by Kantor’s art; not merely the notions of history and remembrance, but also of consciousness, identity and universality.

It is a question of presenting the allure of that art in the context of the contemporary age, an age open toward the future.

Tadeusz Kantor (1915–1990), painter, draughtsman, theatre director and set designer, the creator of happenings, artistic actions and theoretical manifestos, was one of the most famous representatives of Poland’s post-war avant-garde. As a painter, he was involved with the Krakow Group and the Foksal Gallery. During the Nazi occupation of 1939 to 1945, he set up the Underground Theatre in Krakow. Then, in 1956, he founded Cricot 2 Theatre there and went on to create a number of legendary productions, including The Dead Class (1975) and Wielopole, Wielopole (1980). One of the world’s most distinguished twentieth-century theatrical figures, he was the holder of numerous awards, including the Rembrandt Prize, bestowed by the Goethe Foundation in Basle in 1978 for his outstanding contribution to the shaping of the face of the art of our age. To mark the centenary of his birth, UNESCO has declared 2015 as Tadeusz Kantor Year.