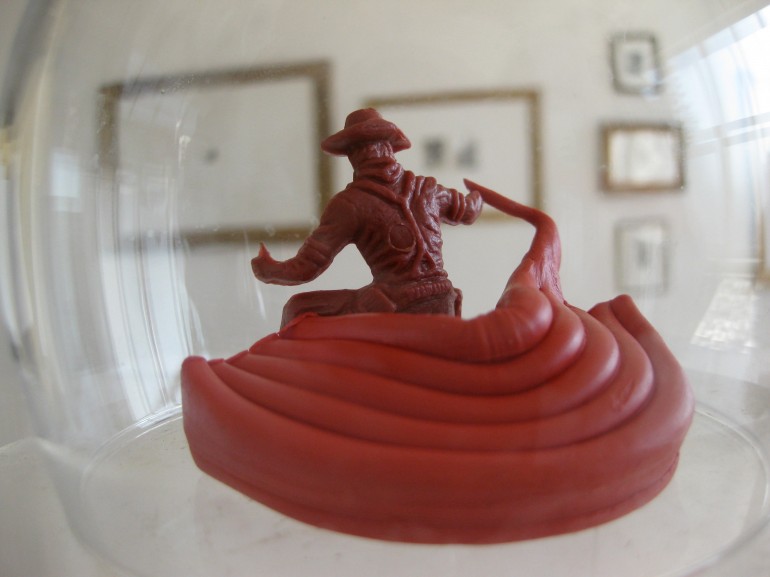 ”Everything thus starts from the beginning”1.

The first photographic image that has persisted in my memory until now is a page from the magazine Fotografie published in the GDR (around 1985): a reproduction of Koen Wessing’s Chile 1973. It shows a man walking on the street, but one’s wandering gaze is suddenly attracted by three soldiers leaning against the wall on the left…

The exhibition EXIT/ Resurrection is a continuation of the project Labyrinthus created in 2014 and presented at the Contemporary Art Centre (Vilnius). EXIT is the title of the last, the sixteenth, room in the diagram of Labyrinthus, which contains the image of a divided Christ. In the Foksal Gallery, the starting point for the ”grand narrative” becomes a collection of photographs and several sculptural objects that suggest an atmosphere of a museum. The exposition presents images from various geographic places and periods, which were collected by tuning in the unconscious and chance. It is supplemented with an archive photograph from the Foksal Gallery: Jarosław Kozłowski’s Metaphysics (1972), which serves as a link to the gallery’s discourse of memory.

The collected images, squeezed into the frame of space and time, represent our existence and collective consciousness through certain social and temporal signs, (autobiographic) fragments and unique stories frozen on the surface. As they encounter the viewer, the images not only represent the subject, but also create a temporal space for us looking at it, which turns into action in the timeless universe of our consciousness. The photographs are coded by three recognisable numbers: 1, 2 and 3.  Through repetition, these numbers turn images into symbols and refer to the sacral dimension in the Christian culture, mythological and philosophical interpretations, and stories as religious experiences. The narrative is acted out in the recognisable social field where those numeral symbols work as a tradition or unavoidable law as well as a natural existential link between the molecules of society, permeated with irony.

The pattern is created intuitively, according to the succession assigned to the images; the repeated numbers generate the rhythm. Perhaps later the consciousness constructs connections or assembles separate visual segments. Even if the parts are, as if, completely unrelated, the consciousness finds ways to join them into a linear story with the help of numbers hidden in the images. The beginning may emerge at any point and move to any direction. The stories thus formed skip the temporal, geographical and logical spaces and become self-cognizable. This way the collection constructs an anticipated narrative stitched up by hardly visible logical threads. The text accompanying the exposition is constructed by using the same ready-made strategy. It does not connect the images to literature; it is rather a new grid laid over the visual narrative forming a third layer: a visual rebus as a personal journey… a testament, a possible version of the artist’s world.

(”a happy ending – everything is fine”).

Born in 1970 in Kaunas, Dainius Liškevičius is a graduate of Vilnius Academy of Fine Arts. His most recent solo exhibitions both took place in Vilnius;  Museum (National Gallery of Art, 2012) and  Labyrithus (Contemporary Art Centre, 2014). This year Dainius Liškevičius represents Lithuania at the 56. Venice Art Biennale. EXIT / Resurrection at Foksal Gallery is his first solo show in Poland.