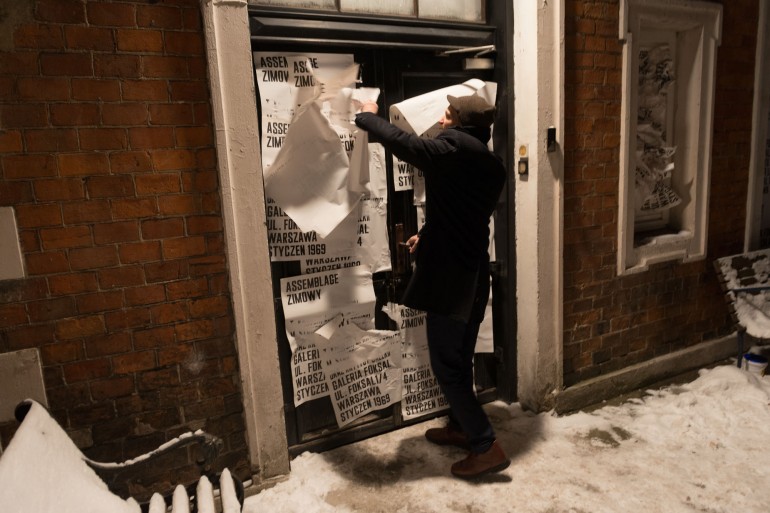 Malone presents his highly original and idiosyncratic take on the rich legacy of the Foksal gallery, focusing on it’s earliest years and considering them from the perspective of today. This is no fetishizing of the archive or nostalgic imitation of the avant-garde, instead it attempts to reconsider the core issues and challenges laid out by the gallery from the mid-60s and into the 70s, and test them in relation to the contemporary concerns of culture, politics, and the market. Exploiting both his outsiders perspective as an internationally active artist (originally from New Zealand), and an insiders knowledge based on his passion for Polish post-War art and the experience (since being based in Warsaw) of working with numerous galleries on the English editions of their publications, Malone has prepared a site specific project that encompasses installation, performance and text. At the heart of the project lies his republication in English, with corrections, of all the text produced by the gallery in its first 15 publications (from 1966-1968) a form of artists book it also literally enacts a re-reading from a present moment and the undertaking of service to this history by making the texts widely available and accessible.
As is common for Malone this project utilizes both a Polish and an English title, in close relation but not quite as translation. Both resonate with idea reading, in this case, history, through an archive, as an active engagement in the present, looking for both factual proof of the time past and tracking points of difference. Visitors are encouraged to attend the opening promptly to view the simultaneous performances at the start of the evening. Malone is better known to many in Poland for this work, while he has sustained his practice internationally.

Completed a degree in Art History at the University of Auckland in 1990. Spent 1991–92 at the Elam School of Fine Arts and two years between 1993 and 1995 travelling in North and Central America and Europe and has subsequently travelled regularly throughout Asia. Completed degree in Intermedia (Time Based Arts) at the University of Auckland in 1996.

Was a founding member in 1992, and administrator from 1996–97, for TESTSTRIP, New Zealand’s first Artist Run Space, and is one of five artists and critics who founded Cuckoo in 2001, a Contemporary Art Project that worked critically and transiently through existing galleries. In 2007 co-founded the countries first Artist Run dealer gallery, Gambia Castle. In 2002 took a break from solo exhibiting to concentrate on projects including recording a hip-hop album and consolidating own music label, AoAtearoa Records and spent five months studying Mandarin at Beijing Language and Culture University, Beijing, China.

Held teaching positions between 1998–2001 lecturing in Photography and Contextual Studies at the Manukau Institute of Technology, School of Art and Design and in 2003 took a position as lecturer in Intermedia (Time Based Arts) and later in 2004 also in Sculpture, at the Elam School of Fine Arts, University of Auckland, eventually holding position as Discipline Head of Time Based Arts at Elam.
In 2007 re-located to Warsaw to consolidate practice in Europe from there.