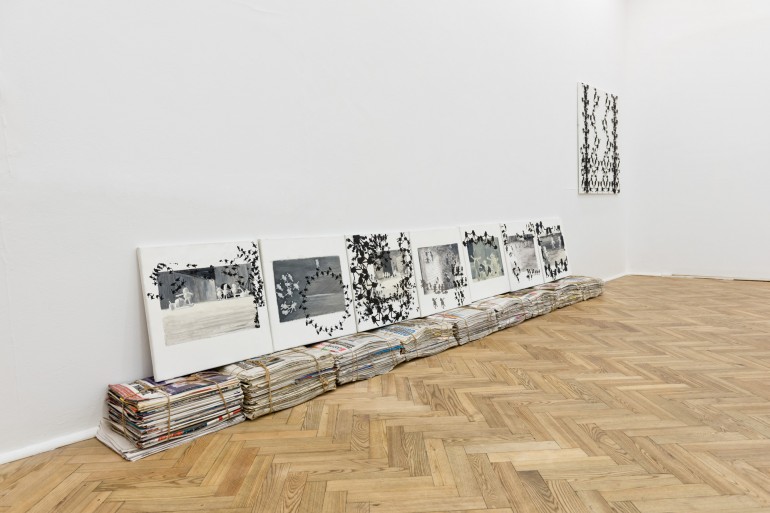 For more than thirty years now, Marek Chlanda has been presenting his work in the form of unique constructs composing a whole made up of multiple component parts, primarily paintings, drawings, sculptures and objects. They find reflection in various quotations drawn from the traditions of culture, history, art, literature and philosophy, augmented by the artist’s own commentary. Within this collection of aphorisms, fragments of though, quotations and notations of contemplations, there is no fixed hierarchy of utility or chronology. The relationship between the visual layers of Chlanda’s work and the semantic and verbal aspect is illuminative here, not illustrative. In so being, the visible thoughts, commentaries and quotations assume the quality of a ‘flash’, as Wojciech Suchocki put it. In avoiding literalness in favour of mystery and allusion, Chlanda succeeds in maintaining the autonomy of both means of expression in such a way as to ensure that his commentary never emphatically determines our attempts at reading the meanings. Jaromir Jedliński has written that: … Chlanda’s method of work involves operating analogues. The substance of the work constitutes an investigation of the relationship between original and copy, between vision and image, the interior and exterior drawing, reality and illusion. The parity of various times, places, feelings, thoughts and emotions, as well as the affinity of identity, marks the artist’s steps in this process. Chlanda himself says that he “also engages in visual realisation”, when, for instance, as regards a painting, a given image is enriched by his individual sense of visibility and thought. The Spa Town exhibition at the Foksal Gallery is the result of part of Chlanda’s work during 2011 and 2012. More powerful than ever before, it demonstrates his strategy for creative growth, a sui generis therapy practiced in both his life and work in the art world of today.

Spa Town, 2011–2012, — artist writes — consists of two hundred and fifty-three pictures on canvas and paper and includes several spatial objects related to the images. They are arranged in thirty-four fragments. This presentation of exhibition + catalogue is the Foksal Version; the small Spa Town is on a business trip.
An indicative sentence: by means of art, I work on a form of living; it has a range of consequences; I acknowledge art as a tool and an artwork as an instrument which serves, aids and heals. And it is enough to treat them as an extension of the body in order to grasp their hybrid properties; they enhance and shine a light on the sensation that subject and object are constantly shifting.

Every fragment of Spa Town is more of an argument for, or proof of, the fact that exercises and research which reveal a certain method of work and life are performed. I would not have conceived them myself; I am indebted to, and inasmuch as I am able, in contest with, Cézanne and his studies of Mont Sainte-Victoire, Wróblewski and his 1957 series of monotypes and Grotowski, with his theatre productions, ‘Acropolis’ and ‘Apocalypsis cum Figuris’. The work of these three titans is worth taking on with a simultaneous obliviousness to, or quite simply, passing over of, their finished work. First and foremost, it is a question of their modus operandi, of something comparable to fundamental research, differing from its advanced counterpart in its channelling, scale and… unforeseeable efficacy

Born in Kraków on 12th November 1954, Marek Chlanda graduated from that city’s Academy of Fine Arts in 1978. From 1980 to 1982, he taught at his alma mater, going on to the Bergen Academy of Art and design, where he ran an experimental, didactic project known as The Travelling Academy from 1983 to 1984. Between 1986 and 1988, he worked as a lecturer at the Cieszyn branch of the University of Silesia. He is the holder of numerous awards, including the Nowosielski Foundation Prize for Outstanding Achievement in the Visual Arts. Spa Town is his fifth exhibition at the Foksal.