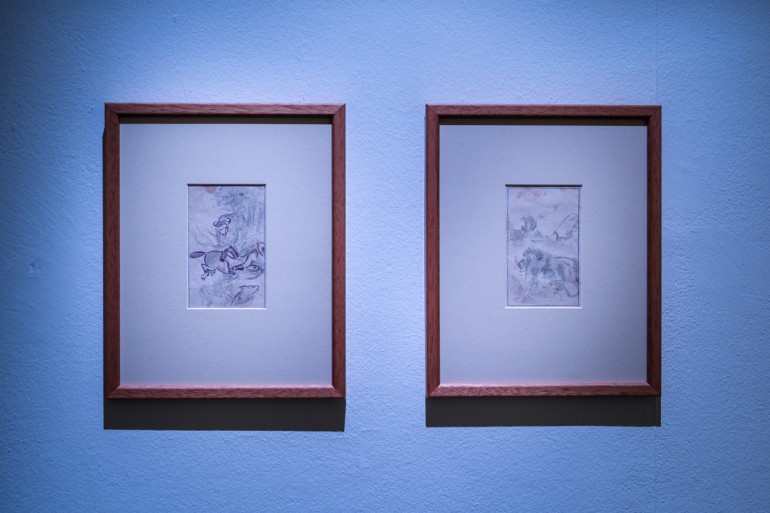 Angela Markul’s Do Not Forget exhibition was inspired by some notes rediscovered in her family’s archives, the recollections of the grandfather whom she had never had the opportunity to get to know well. What she was to discover in them are the tragic wartime fates of her family during a siege which lasted for several years. The starvation and bitter cold that held the city in their grip led to the deaths of her kindred, including her great-uncle, himself a man skilled with the pencil. However, Markul makes no direct reference to the figures of her forebears, but employs metaphor and the elements characteristic of her work to build a disturbing atmosphere. She draws the viewer through a desolate, frozen landscape, a raw and dismal space where icy light and the distorted, automatised clatter of a railway train intensify the sense of oppression. The heart of the installation is a video showing a sui generis journey through the past, a journey which will never end. This black and white, smoke-darkened and somewhat blurred, moving picture brings to mind clips from old newsreels and dispiriting documentary chronicles filmed at the fronts of the Second World War. Do Not Forget steps into the discussion on collective and personal memory understood in the widest sense. It ponders the possibility of coming to know one’s own roots. It depicts the void which accompanies uncertainty, isolation and yearning along the road toward seeking and defining one’s own identity.

Born in 1977 in Szczecin, Angelika Markul lives and works in Malakoff, close to the centre of Paris. Her first solo show in Poland, A Fly’s Dream, was held at the Foksal Gallery in June 2006. The exhibition opened up the road which was to take her to the country’s most important contemporary arts institutions. Her highly individual work, which comprises videos, sculptures and extended installation spaces has become a powerful presence on the Polish arts scene. At the same time, she is intensely active in the international contemporary art world.

The most important solo ventures that she has undertaken in Poland include Clarté Souterraine, Centre for Contemporary Art (CCA) Ujazdowksi Castle, Warsaw (2007), and New Moon, CCA Znaki Czasu, Toruń (2009), as well has her most recent shows at the Labyrinth Gallery in Lublin and The Hunt at the Arsenal Gallery in Białystok (2012). She has also shown her works in numerous group exhibitions, such as Postmodernity and Eternal Life, Galeria Miejska Arsenał (the City Arsenał Gallery), Poznań (2007), the Memory of this moment, from the Distance of Years, Schindler’s Factory, Kraków (2007), Iceberg, a sculpture-performance for the opening of CCA Znaki Czasu, Toruń (2008), Freedom from Profit, the Zachęta National Gallery of Art, Warszawa (2009) Follow the White Rabbit, Bunkier Sztuki, Kraków (2010) and Focus Łódź Biennale (2010). Her works have been seen in both group and solo shows at numerous exhibitions in Paris and elsewhere in France, in a great many important arts institutions in other countries, including Germany (Berlin, Dortmund), Italy (Turin, Venice) and Switzerland (Lucerne, Lugano) as well as in London, Madrid, Trondheim, Montreal and Yokohama.