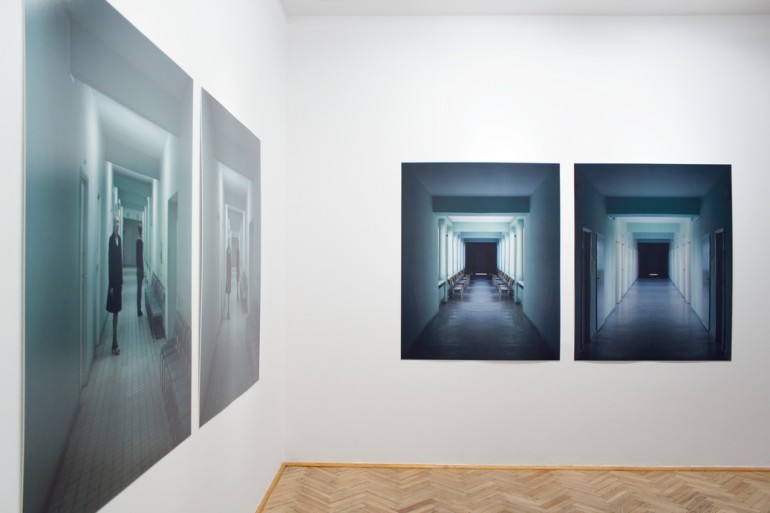 This is our first presentation of the work of Diana Fiedler at Foksal Gallery. Diana Fiedler was born in 1976. She studied from 1995 to 2002 at the Academy of Fine Arts in Poznań,  where she now works as a teaching assistant. She also founded and curates Aneks Gallery in Poznań together with Mikołaj Poliński.

The artist investigates identity through various media. From drawings to assembling found objects (furniture, place settings, chess sets) and found images (maps, X-rays). At present she also constructs her own images – mainly photographs and video – in individual and inventive ways. This makes up the majority of her present output, a selection of which we are showing in the spring of 2008 at Foksal Gallery. At first sight these large format photographs appear strictly realistic. However upon closer examination it becomes clear that they are processed images, evoking something uncanny, unfamiliar and anxious. There is also a looped video that is integrally connected to the images and the location. Her interest is focused not only on personal identity but also the identity of places. She applies the elementary experience of her own feelings and her own states of mind. Feelings of the familiar and the unfamiliar. Toward people and places that may be – at the same time – both familiar and strange. The creative but straightforward methods employed by Diana Fiedler in her work – especially the photographic and film techniques – are an integral element of the meanings that these works can have for the artist and a careful viewer. In the very methodology of her work, and in its presentation in the exhibition space, a deep consideration of place is obvious. This is another persistent motif in Diana Fiedler’s research work, both theoretical and practical. Work that is consistently intelligent, fresh and compelling. Her concepts and their realization come together to make intriguing situations. Visual-spatial events that are characteristic of her exhibitions.

This exhibition, with its ambiguous title Double, is no exception. In an interview with Jaromir Jedliński, published in the catalogue of the exhibition, the artist says of her work, Double refers to both mental and physical spaces. To identities and architecture that assimilate each other. The corridor itself might be as much mental as physical. I like this thought. This bleed. These transitory spaces already have a strong liminal character. They are non-places that exist between the familiar and the unfamiliar, the real and the artificial, interior and exterior. In such a location you might be both familiar and unfamiliar to yourself. Isolated from yourself. Alienated, anxious and uncertain. Your internal head space might then become some sort of non-place.
The artist has created a labyrinth of interiors, identities and meanings. Wandering through this space the gallery becomes something more than simply the frame for the work. Even though that work is fixed to the walls, a labyrinth of sensations, feelings and understandings – delineated but not definitive – might be met in its corridors.