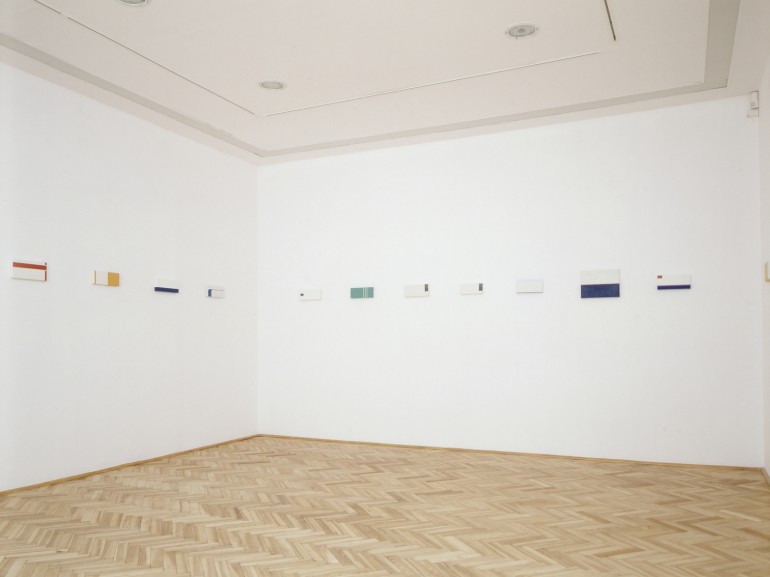 Presented to us, is a new series of pictures painted over the last months by Rafał Jakubowicz, bearing the comprehensive title Form. The artist usually produces sets or cycles of pictures. Among those painted at an earlier date was that called Reparation. Jakubowicz said on the occasion of the presentation of the latter: The paintings have organic palpability. The canvases have been mutilated in a way. There was also another set of small-sized pictures, like the present series, but at that time figurative, called zugzwang, featuring, among other motifs, that of red cross.

The set of over twenty pictures of the Form series are painted with precision bordering on that of an apothecary, in oil on canvas spanned on stretchers that seem strikingly solid considering the relatively small, though varying sizes of the different rectangles. These are multicolour paintings based on geometric divisions, the principle of which is apparently arbitrary.

In contrast to the rather stifling impact of Jakubowicz’s earlier painted series, we seem to be able to breathe deep in front of the new set. At first, it is not clear why.

Let us begin by considering the title, Form. When we consult Maurice Merleau-Ponty on the handling of the issue of form, we are instructed that style structures an experience by giving form to it. Indeed, Jakubowicz’s paintings seem to be formal exercises in Post-Constructivist stylistics and, in fact, in like decorative stereotype. What is the purpose of this kind of exercise today, and what is the rule behind the alleged ‘construction’?, we go on asking ourselves. In a conversation about the pieces, the painter has mentioned Leszek Kołakowski’s ‘analgesic culture’, the culture of painkillers, an expression used in his early essay Obecność mitu [The Presence of Myth]. ‘Mind your form! Keep in form!’ is heard from all sides, and much more incessantly so then at the time of the nascence of Kołakowski’s essay. This gives rise to an association between the formalism of the images and the ubiquitous, one might even say obligatory, colloquialisms.

Before entering the exhibition space with the mute geometric pictures, film footage of a glass of fizzy water with two soluble tablets is shown. This prologue of the Form exhibition in the vestibule of the room with thus titled paintings speaks in favour of the latter understanding of the word ‘form’ as feeling fit and good-looking, not to say fighting fit, which is brought home to us by the colour and soothing lay-out of these new little pictures. Moreover, one of them renders precisely the colour and divisions of the colour fields of the box of medicinal calcium added to the matter-of-fact publication accompanying the exhibition. Each box contains two leaves (fifty tablets) of calcium pantothenicum. Thus, perhaps, the other paintings are not abstract either, are not merely a formal search, but refer to something seen and later faithfully and mutely depicted.

In a statement made several years ago, Rafał Jakubowicz observed : I am anxious to express definite ideas as economically as possible, by reducing my means of expression to the absolute minimum. Through articulation on the border of silence. This is apparently the intention behind all his work, though it lies in the nature of what he does continuously to ponder on things, in that on the work of others, and even more so on the possibility of, and grounds for, expression, on the very need for articulation.

In an untitled piece of poetry, one on the border of silence, ‘***’, included in the Wiersze, głosy [Poems, Voices] collection. Ryszard Krynicki has recorded the following:

This is what Form is about. And this is, so I believe, what it is.

Rafał Jakubowicz, born in 1974 in Poznań. Graduated from the Academy of Fine Arts in Poznań; Department of Art Critic (1999) and Department of Painting (2000). Ph.D. student at Institute of Art History of Adam Mickiewicz University in Poznań. Works in various media. Author of publications in art press and catalogues of exhibitions.

The Role of the Lifetime
Red Square Dance