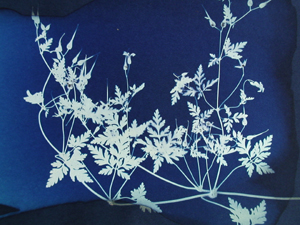 The exhibition of two independent groups of works by two British artists, Alexander Hamilton and Richard Ashrowan, is shown for the first time in Poland at the Foksal Gallery, 1/4  Foksal Street, in the summer of 2008. The title of the exhibition Blue Flora Celtica – Kinloch Rannoch ~ Fingals Cave refers to both realisations. Alexander Hamilton’s cyanotypes, a non-camera process, is based on photosensitivity of cyanide compounds. In this exhibition the work, Blue Flora Celtica gives form to the dynamic creative processes that mark out the artist’s conceptual journey, his own search for the blue flower, mapping out key principles, realisations and breakthroughs that makes this exhibition, to an extent, a retrospective. Simultaneously Richard Ashrowan’s triple projection shows unseen, almost extraterrestrial phenomena at Fingals Cave, the cave in the rocks of now deserted Staffa Island in north-western Scotland. Both Alexander Hamilton’s and Richard Ashrowan’s works have numerous and rich meanings and multilevel senses as well as references – at least to works by Joseph Beuys and his journeys in the northern part of Scotland. At the beginning of the seventies, Hamilton, then a student at the College of Art in Edinburgh, helped Beuys to arrange there his contribution to the exhibition Strategy: Get Arts (1970). At that time Alexander Hamilton became acquainted with Beuys’ work Celtic (Kinloch Rannoch) Scottish Symphony. When we met Hamilton and Ashrowan, who participated in the group of guests accompanying Richard Demarco’s visit to Poland, we started the preparatory works to our present exhibition, which commenced a year ago. In relation to Beuys’ Celtic journeys, Ashrowan decided to take up Beuys’ unfulfilled ambition to go to Staffa and make a film on the island. That place, especially Fingals Cave (a sea cave deeply rooted in Celtic legends) had inspired many artists like Blake, Wordsworth, Keats, Tennyson, Turner, and in particular Mendelssohn (who, inspired by these landscapes and myths, created his ‘Celtic masterpiece’, the Scottish Symphony), as well as Beuys and Henning Christiansen.

Many threads of our collaboration with both these British artists appeared to be akin in the interests and commitments of the Foksal Gallery; this includes especially the work and the attitude of Joseph Beuys, and his specific cooperative meetings with Tadeusz Kantor in Edinburgh at the beginning of the seventies, where many artists from the Foksal circle were exhibited at the time. Among those who took part in those projects was Wiesław Borowski, as well as Ryszard Stanisławski from the Museum of Art in Łódź, for which in 1981 Beuys gave a large collection of his works entitled Polentransport 1981, which has been since worked out critically by Jaromir Jedliński over a period of more than fifteen years. The artistic visits of Beuys, Kantor and many other artists to Edinburgh in the seventies, also including Borowski and Stanisławski, were the result of the unusual activity of Richard Demarco, the Great Impresario of Italian temperament and Mediterranean taste and appetite, added to Scottish northern ones.

All these bonds coincide as it were in the fresh and new artistic exhibition project that we are presenting at the Foksal Gallery. We hope that the project will have its continuation in the form of the artistic trip to Scotland planned by Marek Chlanda – another artist from a select group of the Foksal artistic family – who is going to realise his work there, in collaboration with Hamilton and Ashrowan.

The exhibition at the Foksal Gallery and the accompanying publication have been realized thanks to the considerable help of the Adam Mickiewicz Institute in Warsaw and the National Cultural Centre – Ministry of Culture and National Heritage in Warsaw, and by The British Council.