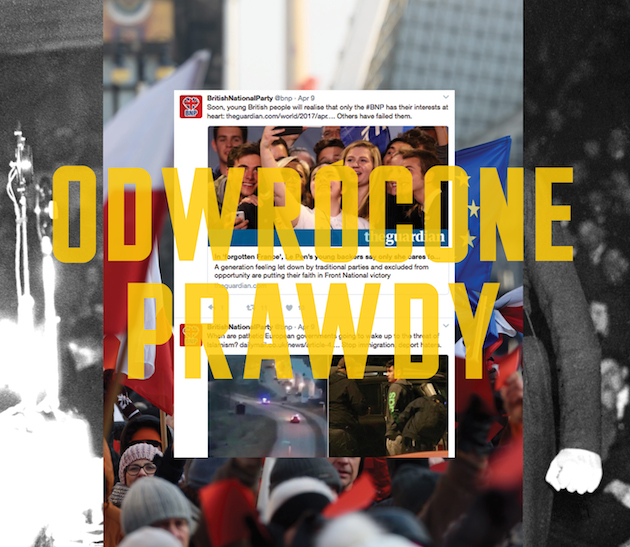 Hate Library is a project developed by artist Nick Thurston with the support of historian Matthew Feldman and a range of contributors, following several years of conversations with Galeria Foksal. This exhibition has been generously sponsored by the British Council.

Installed as a public reference resource, Hate Library explores the language of far-right political groups and parties across contemporary Europe; especially their use of online forums as recruiting and collaboration tools. The inter-related components on show here mix allegory and literalism by presenting texts as documentary artworks within a symbolic and social stage for reading, understanding and dialogue.

The arrangement of the main exhibition space translates the Flag of Europe, the order it was supposed to represent, and the contradictions now straining that endeavour. On orchestral lecterns, samples of on-going public discussions between supporters of twelve of the most significant far-right groups from European nations have been exported from their original digital platforms and rematerialised here as ‘History Books’. Each of these unedited volumes pauses one conversation, repeating it offline by using simple data-gathering and print-on-demand processes.

Two of the works on the gallery’s walls repeat a different, lateral chain of conversation. The bands of over-sized blue text wrapping round the hallway form the looped lines of a spiraling poem. Each phrase included is the title of a thread from a public web forum, kept in the order they were found with only duplicated titles removed, and typeset to fit the architecture. In the main room, the frieze of running columns are the results returned by searching for the term ‘truth’ across the European sections of the Internet’s largest white supremacist discussion platform, ordered chronologically until the three walls are full. Together, these backdrops signal the vexing growth of trans-national cooperation between nationalist groups, as enabled by digital networked technology. This inter-connectedness seems to be helping shrink the gap between the far-right and centres of state power in Europe and elsewhere. During the last generation, some 20 far-right parties have entered into governing coalitions around Europe.

The source material reproduced in Hate Library is offensive, mundane and just a few clicks away. It remains publicly available to Internet users anywhere in the world, and is traceable via the metadata about its collection left on show.

The sharpening problems of civic cohesion and free speech at the heart of this project are condensed in the collage on the final wall. From back to front yet big to small, an iconic photograph of Oswald Mosley addressing a fascist rally in 1930s London and a screen grab of the British National Party’s Twitter feed sandwich a news media image of pro-EU liberals marching in Warsaw. The slogan-poem printed over the top remixes a pair of colloquial English wordplays and a metaphor used in dramaturgical sociology. Through its combinations of text and image, this poster highlights the differences between ‘front-stage’ and ‘back stage’ behaviour by far-right groups and parties, as well as their mobilisation of PR-friendly strategies to conceal and legitimate the beliefs that actually unify their memberships.

Hate Library documents a few of the stances adopted by far-right and rightwing fringe communities. It also juxtaposes the often confusing overlaps between public (front stage) and online activist (back stage) political discourses, and between practises of political self-imaging in a changing Europe – one that seems to be harking backwards towards new crises in frighteningly familiar language.

Zbigniew Gostomski
Marta szulc, We are only seeking Man