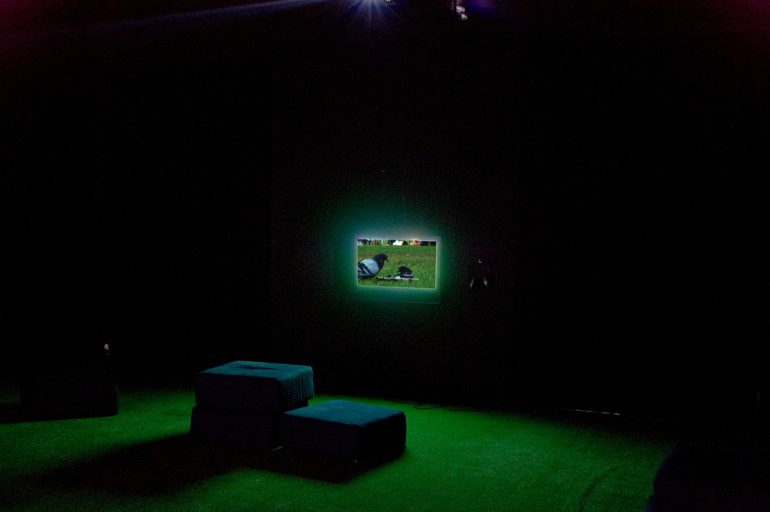 Born in Ploieşti, Romania, in 1970, Irina Botea is one of the most interesting representatives of her country’s contemporary arts scene. She studied at the National University of Arts in Bucharest and the School of the Art Institute of Chicago, where she is now teaching. Her work has been shown at numerous galleries and museums in Europe, the USA and Asia. In Poland, her films were screened as part of the Dada East exhibition at the Zachęta National Gallery of Art (2008) and the History will repeat itself exhibition at the Ujazdowski Castle Centre for Contemporary Art (2008). Her solo exhibition, A Moment of Citizenship, can currently be seen at the Jeu de Paume in Paris. She lives and works in Romania and the USA.

Irina Botea’s Re-place exhibition consists of two video film projects; the diptych, Felicia says (2008) and Felicia (2009), which she made together with her partner, Razavan Botea, and Stereotypical Conversations (2006).

The first project tells the story of Felicia, an emigrant from Romania, whom the artist and her partner met in Paris on the banks of the Seine. The chance meeting and their conversation about homesickness for one’s own country and language was transformed into a tale of dramatic events from the protagonist’s life. In Felicia Says, the story comes from Felicia’s own lips, recorded, by Razavan Botea. The powerful impression made by the central character’s account of herself and by her character as it emerged within the film’s structure led to the filming of the second part of the project, Felicia. This time, the scenes from Felicia’s life were played by professional Romanian actors, emigrants like herself, and working as taxi drivers in Chicago. What is of the essence is that they are all men, for whom the protagonist’s direct tough-talking presents a challenge. Felicia’s story touches upon an issue which is not only highly topical in numerous European countries, but is particularly evident in Romania; intolerance toward the Romany minority. The piece confronts the viewer without giving a specific direction for interpretation. It provokes a series of questions about work, freedom, being able to make choices, negotiation, the perception of human beings as a commodity, fiction and reality, trust, identification with the protagonist or not, aggressor and victim. In Stereotypical Conversations, four Americans, an actor, a theatre director, a visual artist and a composer, take on the personae of Romanians. Mircea, Alice, Liviu and Andrea hold conversations about Americans, as perceived by Romanians. In the improvised conversation, use is made of quotes taken from a discussion forum, quotes along the lines of “Americans are…”

The exhibition’s title, Re-place, is concerned with relocation, changes of place, changes in personal circumstances and changes in ways of thinking and points of view, depending upon the situation in which a person currently finds himself or herself. In both works, the artist attempts to pose questions as to the real possibility of putting oneself in someone else’s place, of being in someone else’s shoes, in other words, of empathising with, and understanding the intention behind, his or her actions. She attempts to engage in a dialogue regarding stereotypes from the standpoint of the person who is an active participant in a given situation.Irina Botea will expand upon this issue in a talk entitled Stereotypes and Auditions, to be held at the Foksal Gallery on the day after the exhibition preview.

How to explain performance to living flies
Bars and Clocks